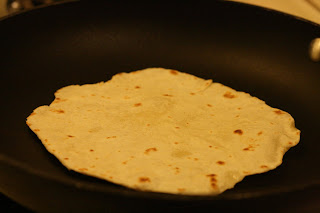 Mexican food is probably my favorite kind of ethnic food, be it the Americanized version or the authentic, made-by-a-grandmother kind. The Mexican dish that most people probably eat is tacos, which I adore and is definitely one of my comfort foods. When I decided to put tacos on the menu tonight, I thought I should try making my own tortillas for the first time. I've watched enough episodes of Mexico: One Plate at a Time with Rick Bayless that I was anxious to try out making fresh tortillas. At first I went right to my primary cookbook, The Joy of Cooking, out of habit, but if I'm going to get authentic Mexican recipes, Rick Bayless is one of the best sources out there as he spent 6 years living in Mexico to research his first cookbook of authentic Mexican cuisine. He's also probably my favorite chef, although I can't help but be delighted to watch any episode of Julia and Jacques Cooking At Home or anything with Julia Child or Jacques Pepin.

I liked the fresh tortillas much better than store-bought, although the taste isn't drastically different. The texture is better and to me they just tasted less processed. I bet they'd be more flavorful if I'd used lard instead of vegetable shortening, but that isn't something I keep around.

This time my tacos were ground beef with onions and green peppers, topped with salsa, sour cream, cheese, and lettuce, thought if I'd thought of it earlier I would have thawed my chorizo instead, which is far better than ground beef in my opinion. Next time we have tacos, enchiladas or quesadillas I'm going to try making corn tortillas instead.

1. Make the dough. Combine the flour and fat in a large mixing bowl, working in the fat with your fingers, until completely incorporated. Dissolve the salt in the water, pour about 2/3 cup of it over the dry ingredients and immediately work it in with a fork; the dough will be in large clumps rather than a homogeneous mass. If all the dry ingredients haven't been dampened, add the rest of the liquid (plus a little more, if necessary). Scoop the dough onto your work surface and knead until smooth. It should be medium-stiff consistency -- definitely not firm, but not quite as soft as most bread dough either.

2. Rest the dough. Divide the dough into 12 portions and roll each into a ball. Set them on a plate, cover with plastic wrap and let rest at least 30 minutes (to make the dough less springy, easier to roll).

3. Roll and griddle-bake the tortillas. Heat an ungreased griddle or heavy skillet over medium to medium-high heat.

On a lightly floured surface, roll out a portion of the dough into an even 7-inch circle: Flatten a ball of dough, flour it, then roll forward and back across it; rotate a sixth of a turn and roll forward and back again; continue rotating and rolling until you reach a 7-inch circle, lightly flouring the tortilla and work surface from time to time.

Lay the tortilla on the hot griddle (you should hear a faint sizzle and see an almost immediate bubbling across the surface). After 30 to 45 seconds, when there are browned splotches underneath, flip it over. Bake 30 to 45 seconds more, until the other side is browned; don't overbake the tortilla or it will become crisp. Remove and wrap in a cloth napkin placed in a tortilla warmer. Roll and griddle-bake the remaining tortillas in the same manner and stacking them one on top of the other. 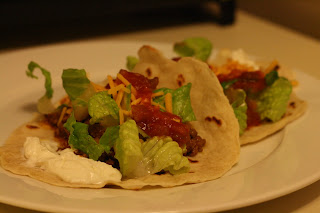