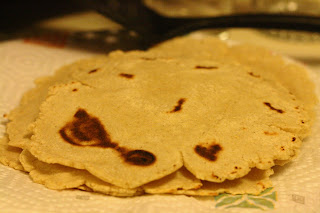 As promised in my Flour Tortillas post, I made corn tortillas the next time we had tacos (this time they were chorizo and onion). Corn tortillas are either made from fresh masa, if you're lucky enough to have a tortilleria nearby, or masa harina, which is what I used. The only kind I found was Maseca, which I found at multiple grocery stores in the Mexican food section.

Like the flour tortillas, the homemade version is better than store-bought, but in this case the difference was much more dramatic. These actually taste like corn, instead of the tasteless corn-colored cardboard found in grocery stores (although there are more authentic brands that are decent). But these are more difficult to make than flour tortillas if you roll them out by hand like I did, since I don't have a tortilla press which every recipe recommends. Corn flour does not contain gluten as wheat flour does (gluten gives the dough structure), so the dough is much more likely to crack or tear as you roll it out, which is why recipes says to use a tortilla press. Although it was more work than the flour tortillas, I think it was worth it.

When reconstituting the masa harina to make the dough, I found it necessary to add more water than initially specified in the recipe (no surprise in this dry winter weather). You want your dough to be softer than Play-Doh, similar to a soft cookie dough, but not sticky. This dough dries out easily and it may be necessary to add water from time to time.


Corn Tortillas
from Authentic Mexican: Regional Cooking from the Heart of Mexico by Rick Bayless

1. The dough. If using masa harina, mix it with the hot water, then knead until smooth, adding more water or more masa harina to achieve a very soft (but not sticky) consistency; cover with plastic and let rest 30 minutes. When you're ready to bake the tortillas, readjust the consistency of the fresh or reconstituted masa, then divide into 15 balls and cover with plastic.

3. Pressing. Cut 2 squares of heavy plastic to fit the plates of your tortilla press. With the press open, place a square of plastic over the bottom plate, set a ball of dough in the center, cover with the second square of plastic, and gently flatten the dough between. Close the top plate and press down gently but firmly with the handle. Open, turn the tortilla 180 degrees, close and gently press again, to an even 1/16-inch thickness.

5. Griddle-baking. Lay the tortilla onto the cooler end of the griddle (or cooler skillet). In about 20 seconds, when the tortilla loosens itself from the griddle (but the edges have not yet dried or curled), flip it over onto the hotter end of the griddle (or onto the hotter skillet). When lightly browned in spots underneath, 20 to 30 seconds more, flip a second time, back onto the side that was originally down. If the fire is properly hot, the tortilla will balloon up like pita bread. When lightly browned, another 20 to 30 seconds, remove from the griddle (it will completely deflate) and wrap in a towel. Press, unmold and bake the remaining balls of masa, placing each hot tortilla on top of the last and keeping the stack well wrapped.

6. Resting. Let the wrapped stack of tortillas rest for about 15 minutes to finish their cooking, soften, and become pliable.