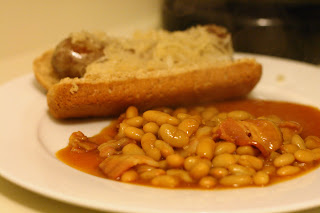 We had some brats in the freezer that needed to be used up and the natural accompaniment to brats, at least in my opinion, is baked beans. Usually I'll just pick up a can, but I decided to make my own for this time. Many of the commercial ones are sweetened with high fructose corn syrup, which I like to avoid, and are often too sweet for my taste. I also just like knowing exactly what is in the things I eat, all the more reason to make it myself. I went to my number one resource, The Joy of Cooking, for a recipe. There were two different recipes, one that involved soaking dried beans and baking them for four and a half hours, and one that involved canned beans and only an hour of baking time. I opted for the latter. Plus, it had bacon! You can't go wrong with bacon.

Pretty much all commercial baked beans are made with white beans. I used Great Northern beans, but navy beans or cannellini beans would probably also work well (especially the navy beans). I used two 15.5-ounce cans of beans because the store didn't have any 28 oz. cans. The recipe doesn't call for you to drain the beans, but next time I think I'll drain and rinse the beans, adding back the amount of liquid I want since the sauce came out a bit thinner than I'd like and maybe bake uncovered for a bit longer. I also think chopped green peppers and maybe even a little bit of jalapeno pepper would be good additions. I also only used 4 pieces of bacon because I had large, center-cut slices and used an 8x8-inch instead of a 9x9-inch pan. Although the recipe doesn't specifically call for it, I cut the bacon into bite-size pieces.

Baked Beans with Bacon
from The Joy of Cooking