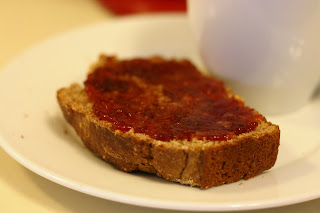 Soda bread is simply bread where bread soda (more commonly known as baking soda or sodium bicarbonate) is used in lieu of yeast as a leavening agent. Traditional soda bread is made from flour, baking soda, salt, and buttermilk. The lactic acid in buttermilk reacts with the baking soda to form bubbles of carbon dioxide and cause the bread to rise.

With St. Patrick's Day only a few weeks away, many people will be making Irish soda bread as part of their celebration. Cooking Light has a wonderful bunch of St. Patrick's Day themed recipes in the March issue, and this recipe comes from there. This recipe is much more complex than traditional soda bread, but is also much healthier.

This recipe calls specifically for steel-cut oats (also called Irish oatmeal)-do not substitute quick oats or old-fashioned rolled oats. Steel-cut oats are processed much less than rolled oats, the groat only being cut into 2 or 3 pieces instead of being rolled, and thus take longer to prepare for oatmeal. They are chewier and nuttier than rolled oats and have a lower glycemic index. Unfortunately, at least at the grocery store I went to, they are also significantly more expensive.

For once I actually weighed my flour instead of just using measuring cups. I know that weighing is more accurate, but I rarely do it. I didn't own a kitchen scale until just a few years ago, so I was always in the habit of measuring instead of weighing.

Note: If you try and find this recipe on the Cooking Light website, a different brown soda bread recipe comes up. The Bacon and Butternut Squash Pasta recipe was not available either (it's called bacon and butternut pasta in the magazine), so it seems the current issue's recipes are not available online yet.

Despite being mostly whole-wheat flour, this bread is moist and delicious and has a wonderful nutty flavor from the steel-cut oats. And, even better, it's extremely healthy!

3. Weigh or lightly spoon flours into dry measuring cups, and level with a knife. Combine flours and next 6 ingredients (though salt). Combine buttermilk and egg; add to flour mixture. Stir until just combined.

4. Spoon the mixture into prepared pan. Bake at 325 degrees for 1 hour and 5 minutes or until a wooden pick inserted in center comes out clean. Invert bread onto a wire rack; cool completely. Remove parchment; slice bread into 12 slices.