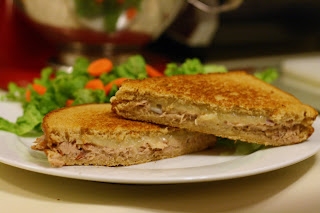 I found this recipe in the January/February issue of Cooking Light. I try to eat tuna at least once a week because I don't like most fish (though I'm working on trying fish again), but that usually amounts to a tuna salad sandwich or tuna casserole. Both are good, but not terribly interesting. This recipe is essentially a jazzed-up version of a tuna melt.

2. Heat a large skillet over medium heat. Lightly coat sandwiches with cooking spray. Cook 3 minutes on each side or until lightly browned.
Posted by Laine at 6:55 PM