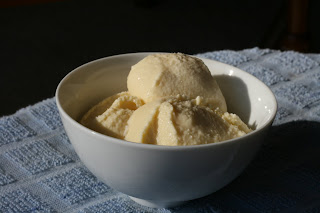 This is the first ice cream recipe I ever attempted to make; it is the first recipe in my KitchenAid Ice Cream Maker Attachment

This recipe calls for 8 egg yolks, so you're obviously going to have a lot of egg whites left over. If you don't want to make macaroons or meringues or eat them for breakfast, egg whites do freeze well (although whole eggs do not). Freezing each egg white in one compartment of an ice cube tray is an easy way to store them measured out for future use.

These instructions are obviously for those with a KitchenAid mixer, but can be easily adapted to other mixers (stand and hand-held) and other ice cream makers.

1. In a medium saucepan over medium heat, heat half-and-half until very hot but not boiling, stirring often. Remove from heat and set aside.

2. Place egg yolks and sugar in mixer bowl. Attach bowl and wire whip to mixer. Turn to speed 2 and mix about 30 seconds or until well-blended and slightly thickened. Continuing on speed 2, very gradually add half-and-half; mix until blended. Return half-and-half mixture to medium saucepan; cook over medium heat until small bubbles form around edge and mixture is steamy, stirring constantly. Do not boil.

4. Assemble and engage freeze bowl, dasher, and drive assembly as directed in the attachment instructions. Turn in STIR (speed 1). Using a container with a spout, pour mixture into freeze bowl. Continue on STIR (Speed 1) for 15 to 20 minutes or until desired consistency (or freeze as directed with different ice cream maker). Immediately transfer ice cream into serving dishes or freeze in an airtight container.