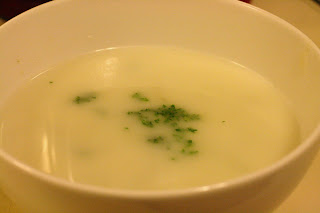 I often spend at least an hour on Saturday watching cooking shows on Create (the 3rd PBS channel). This past Saturday had a soup theme and Jacques Pepin and Julia Child made a few variations of leek and potato soup on Julia and Jacques Cooking at Home. They couldn't stop talking about how good it was, despite being so simple. I decided to pull out my copy of The French Chef cookbook (which I got at a library sale for only $0.50 a few years ago) and browsed through the recipes from the soup show of that TV series. I decided to make potage parmentier because it is the base for a few well-known soups like vichyssoise and watercress soup and I always like to start with the basics. Julia and Jacques were absolutely right-this soup is fantastic, especially considering how simple it is. How could I ever doubt them? Once warmer weather returns I plan on making vichyssoise as it is a soup traditionally served cold.

The most flavorful and onion-y part of the leek is the white part, so use as much of that as you can; I wouldn't recommend using any of the dark green part for the soup (light green is still okay). I used the white and some of the light green part of two leeks to get the 3 cups for this soup. Leeks are also full of dirt, so wash them really well before using them. I cut mine into pieces before washing to get as much dirt out as possible. Yellow onions can also be used in place of the leeks.

There are also pressure cooker instructions for this recipe; I have not included them here. As with most soups, they should be served with a piece of crusty bread, like French Bread.

1. Combine the vegetables, water, and salt in a 3- to 4-quart saucepan. Simmer, partially covered, for 40 to 50 minutes or until the vegetables are tender.


2. Mash the vegetables in the soup with a fork, or pass the soup through a food mill. Correct seasoning. Set aside uncovered until just before serving, then reheat to a simmer.

3. Final Enrichment. Remove from heat just before serving, and stir in the cream or butter by spoonfuls. Pour into a tureen or soup cups and decorate with herbs.
Posted by Laine at 7:07 PM