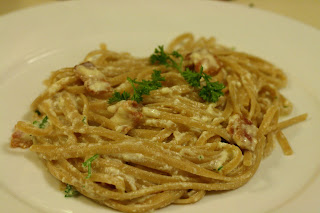 I came across this recipe because it was right before Chicken Pad Thai in my cookbook. It sounded delicious, looked really easy, and I had all the ingredients on hand.

I would recommend using some high quality bacon here since it's the strongest flavor in the recipe. I used smoked, thick-cut bacon and made the sauce in the same pan I cooked the bacon. I poured off most of the fat after removing the bacon but left a little bit so the sauce would get a little bit of smoky, bacon-y flavor. I used whole milk for the sauce because that's plenty rich for me (I can't drink it because it's too rich) and I already had to buy some for Chocolate Ice Cream. I also used whole wheat linguine since I don't buy white pasta. I had fresh parsley, but dried would also be okay. The fresh has a more intense and brighter flavor and adds another texture, so it's preferable to dried.

2. Cook pasta according to package directions; drain and keep warm.

3. Meanwhile, for sauce, in a saucepan combine egg, half-and-half, and butter. Cook and stir over medium heat until egg mixture just coats a metal spoon (about 6 minutes); do not boil. Immediately pour sauce over pasta; stir gently to coat.