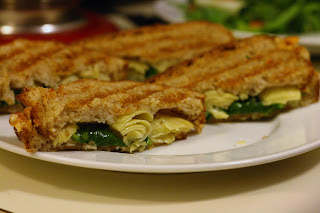 I generally balk at sandwich recipes, but since I got my Cuisinart Griddler

I've been inspired to make some more creative sandwiches. This sandwich was obviously inspired by spinach and artichoke dip (this is a pretty good recipe), one of the best appetizers out there. This made a great sandwich, but I'm already envisioning it as a pizza as well.

Don't skimp on the marinated artichokes, cheese, or bread for these sandwiches. With so few ingredients, each one makes a huge difference. Choose a crusty bread like a french bread, sourdough, or rye; basically any sturdy, flavorful bread you enjoy. For cheese I chose smoked butterkase, a high-fat cheese that melts well; the smoky flavor is a nice contrast to the slightly sour artichokes. I chose Native Forest marinated artichokes which were packed in extra-virgin olive oil with Italian spices. If you have plain artichokes, toss them with a bit of olive oil and spices.

1. Drain artichoke hearts on a paper towel, draining enough excess oil so the bread won't get soggy. Cut into smaller pieces, if desired.

2. Butter one side of each of the pieces of bread. Layer half of the artichoke hearts, spinach, and cheese on one piece of bread and top with a second slice, buttered sides out. Repeat with the remaining ingredients. 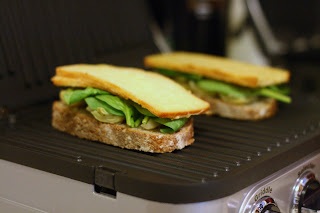 3. Grill sandwiches on a panini press, on a griddle, or in a frying pan until bread is golden brown and cheese is melted. Enjoy! 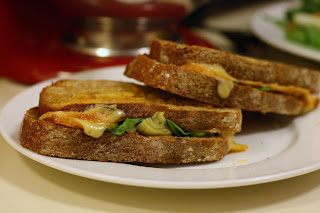