My dad came to visit so I got to out for a second meal this week and I chose the Old Fashioned. We were going down to visit Allen Centennial Gardens and I figured since we'd gone to the trouble to drive and park downtown that we should eat on State Street or the Square, which has a bounty of wonderful restaurants. While I've been to the Old Fashioned multiple times in the past, I haven't been there since before I graduated from UW-Madison in 2006 and moved away and I've been meaning to get back there ever since my husband and I moved back. I also support the Old Fashioned for their efforts to acquire much of their food and drink from local sources.

On this visit I didn't choose a beer or glass of wine to go with my meal (although there are nearly 200 local beers to choose from), but a root beer from Baumeister Brewing in Green Bay. Cream soda is my favorite pop, with root beer coming in a close second, although I don't drink pop very much because I try to avoid artificial sweeteners and high fructose corn syrup. I treat myself to a artisinal soda every week or two, usually root beer, cream soda, or ginger ale. When I saw a root beer on tap, I just couldn't resist. It brought back fond memories of sipping on 1919 Root Beer on tap (and playing Ms. Pac Man) at the supper club my mom worked at when I was a kid. A&W and Barq's root beer can't even compare to draft root beer. It is so refreshing to taste a root beer that is more than just sweet and full of spices and subtle nuances that have long since been neglected since pop became the principal beverage in many people's lives. If you like root beer, never pass up an opportunity to try craft draft root beer.

For lunch I ordered #41 (the sandwiches don't have names),  described on the menu as "wood-grilled and slow roasted pork shoulder, hand pulled and topped with pickle relish, Muenster cheese and smoked paprika sauce on Texas toast". Absolutely delicious; the dim, low resolution cell phone picture doesn't even come close to doing it justice. The pork was moist, well-seasoned, and covered with browned cheese, smoky sauce, and decent (though I suspect commercial) relish. The sweet relish was a nice contrast to the rich cheese and savory pork. The pork was generous piled on, although the Texas toast was unremarkable. I'm not big fan of plain old white bread, but it was an adequate delivery device for the succulent pork. I had fries on the side, but you can also have a salad or upgrade haystack onion strings, herbed potato salad from Porchlight or house-made fresh Wisconsin beer-battered cheese curds. I was deeply tempted by onion strings or cheese curds, but after having Chocolate Zucchini Cake a few hours earlier and with plans to get Babcock Hall ice cream later, I felt I didn't really need deep-fried breaded cheese. 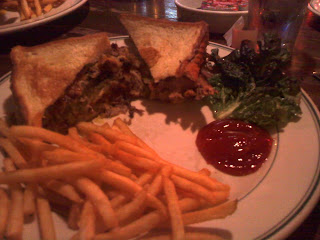 My husband had the Old Fashioned House burger, which he has loved in the past and was savored again today. My dad had the #42, described as "roast beef tenderloin, thinly sliced and served chilled with tiger blue sauce, shaved red onions and leaf lettuce on toasted country bread", which he liked, but said he would choose what I or my husband chose if he was to eat at the Old Fashioned again in the future.

The Old Fashioned is well-worth the effort it can take to get downtown and park, even with all the road construction. The Old Fashioned is located on Capital Square at 23 N. Pinckney St. Madison, WI. Hours are 11 am-2 am Mon.-Fri., 9 am-2 am Sat., 9 am-10 pm Sun.
Posted by Laine at 6:47 PM