This week my husband picked the restaurant for our weekly meal out. Last Friday we were at a Madison Mallards game, so eating at Warner Park was our meal out for the week. (For the record, the Stoddard's brats were moist and flavorful, the beer-battered fries and cheese curds decadent, and the Great Dane brews cold and satisfying. I'd almost go back to Warner Park just to eat!) This week we checked out Porky Pine Pete's, a new BBQ place on Madison's west side. Porky Pine Pete's opened on May 8th, moving from its previous home in Hawkins, a small town near Ladysmith, about 225 miles north of Madison.

Despite arriving at dinner time on a Friday night, the restaurant had less than a dozen customers. This is probably in part due to the fact that the restaurant occupies a spot in an unremarkable strip mall in High Point Centre and has no sign on the outside of the building (it does have a printed tarp hanging in the window). To match the unremarkable outside is a poorly organized and cheesy interior. Tables are seemingly randomly spaced about the open, warehouse-like space with a row of booths along the wall. The decor is  fake Southwestern and I'm so glad they have much, much less of it than Famous Dave's. I love Famous Dave's, but I can't stand how much crap they have adorning every empty space. Although the set-up and decor aren't anything close to the way I'd want my restaurant to be (and they seem to be in desperate need of a type-A personality to help them out), it's the food I really care about, so I can overlook it, especially since I'd prefer new restaurants focus their money and attention on the food, not interior decorating. I love a good hole-in-the-wall or greasy spoon, which rarely has any sort of theme. Who needs one when you've got good chow? 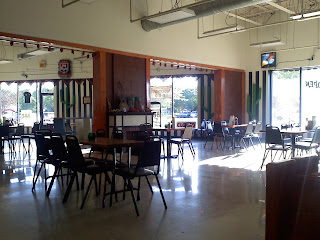 Service is fairly slow. You grab a menu and order at the counter, are given a number, and then someone brings your food out to the table. These seems like a family-run restaurant, and I'm a bit worried that someone will just walk right out the door without going back to the cash register to pay after their meal. It seems to me it would be a lot more efficient to pay at the counter when you order.

I ordered the pulled pork sandwich platter with mashed potatoes and cowboy beans on the side, which cost $8.00. I was disappointed with the lack of choices for sides, especially since what I chose wasn't anything particularly special. The cowboy beans were good, but I've made better at home and would be just as happy with a can of Bush's Grilling Beans. Beans are forever linked with BBQ in my mind, and a good BBQ spot needs to have a good bean recipe of their own. The mashed potatoes were too buttery for my taste. Putting tons of butter in mashed potatoes is just appealing to the lowest common denominator and taking the easy way out (or just covering up flavorless potatoes). I actually want to taste potatoes in my mashed potatoes!

Despite some unremarkable sides, the pulled pork was pretty damn good. Moist and well-seasoned, the pulled pork is piled high on a white bun. The BBQ here is dry-rub, so don't expect to see your meat swimming in sauce when it arrives at your table. But if you do want sauce, each table has four bottles of Sweet Baby Ray's BBQ sauce. This was another disappointment to me-BBQ places should make their own sauce! I hope there's a recipe in the works because house-made sauce is another quintessential part of a BBQ joint in my mind. I'm not a big fan of most bottled BBQ sauce because they are way oversweetened (the first ingredient in Sweet Baby Ray's is high fructose corn syrup), although I realize I'm in the minority. I think the pork is definitely good enough to stand on its own, but most people will probably add sauce. On my next visit, I'm planning on having the ribs. 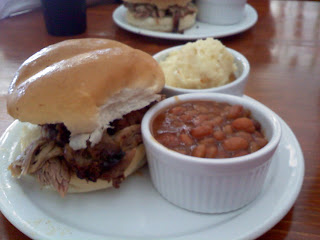 To drink I had the Capital Brewery Supper Club. Only three local beers were available and I think they'd be wise to expand their options in an area so rich with delicious local brews. 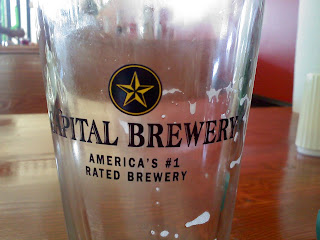 Porky Pine Pete's is off to a decent start, but they have room for improvement, both in terms of food and restaurant logistics. This place has a ton of potential and hopefully they'll gain the following that will allow them to stick around long enough to turn the place into a must-visit BBQ joint. I look forward to revisiting this place after they've (hopefully) made it through some of their growing pains and found an established place in the vibrant Madison restaurant community.
Posted by Laine at 10:03 PM