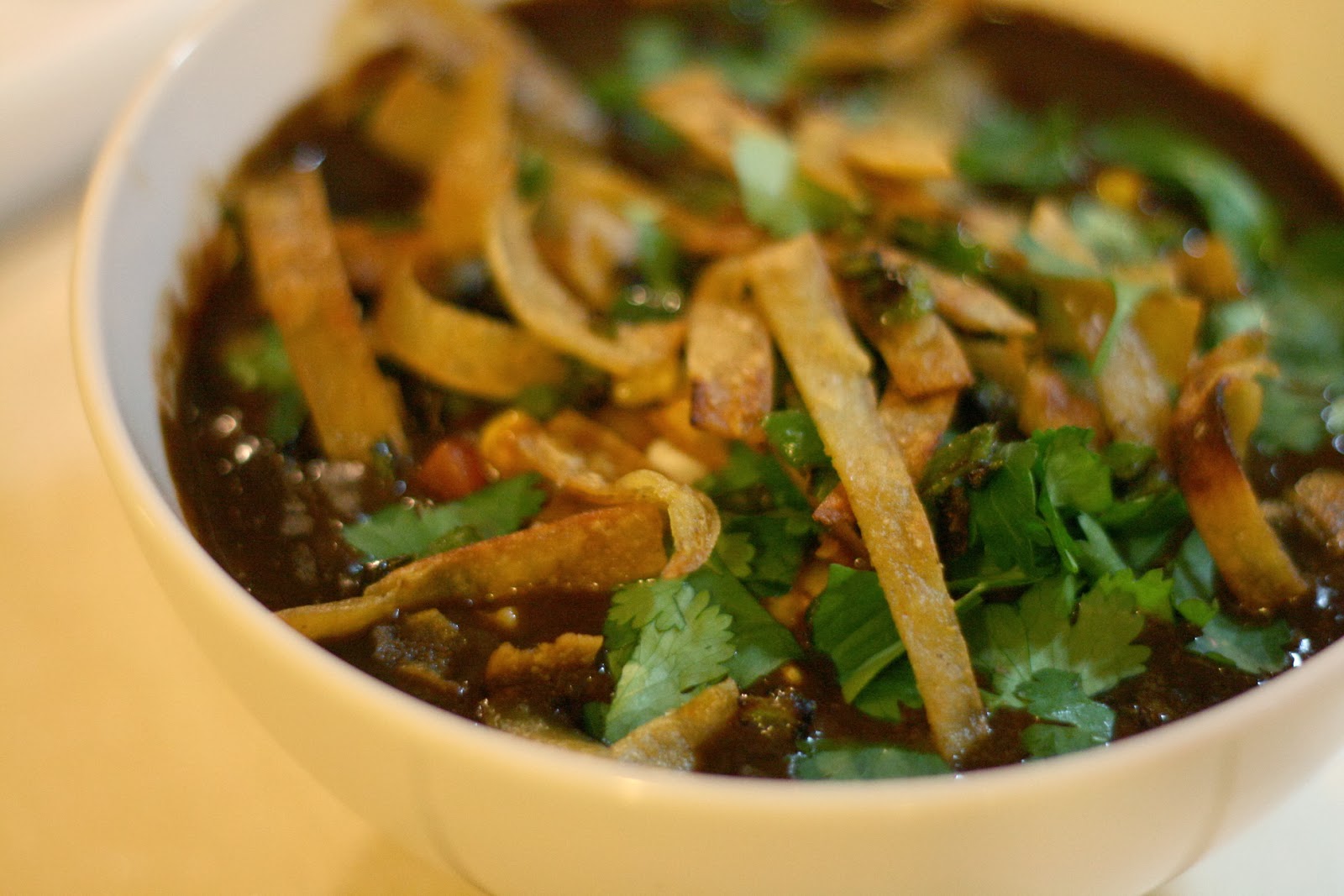 As promised, as soon as I was finished with my batch of sweet potato soup base, I immediately moved on to the black bean variety. The culinary memories of chorizo, chickpeas, and kale, orange and smoky pecans, and spinach, coconut, and almonds, reside fondly in my memory, but I was excited to move on to this new recipe. Although it was a transition out of my recent sweet potato obsession, this was just the kick my tastebuds had been craving.

Sweet potato soup was all silky comfort, but this bowl of creaminess comes with plenty of heat. Ancho chiles infuse the base with sweetness and spiciness, but neither the flavor or the heat of the chiles overpowers the soup. The base is delicious on its own, with a simple swirl of creme fraiche, or loaded up with all the fixings of good chili, but this elaborate concoction is even more suburb. The light shrimp, tomatoes, and corn are the perfect fresh addition to the hearty black beans, sour cream adds a subtle, luxurious touch with the crispy tortilla strips providing the perfect textural contrast. Toeing the line between hearty and light, this complete meal in a bowl is a beautiful transition between winter and spring.

1. In a small saucepan over medium heat, warm the soup base. Whisk in enough broth, stock, or water to reach desired consistency. Cook for a few minutes to heat the soup through. Taste and add more salt, if desired. Decrease the heat to low, cover, and keep it hot while you make the topping.

2. Pour half of the oil into a medium skillet over medium heat. Remove the stem from the from the jalapeno and scrap out the ribs and seeds, reserving the seeds. Finely chop the chile and add it to the skillet. Cut the tortilla in half and cut into slices. Add to the skillet and saute until the tortillas are crisp, 3 to 4 minutes. Use a slotted spoon to transfer tortillas and chile to a serving bowl.

3. Add the remaining oil to the pan, then add the corn, shrimp, and tomatoes to the skillet. Season with salt and saute just until the shrimp are opaque and the corn turns bright yellow 1 to 4 minutes, depending o the size of the shrimp.

4. Transfer the corn mixture to the serving bowl and pour in the black bean soup base. Squeeze the lime half over the top, spoon on sour cream, sprinkle with crisped tortillas, chile, and cilantro, and eat.

1. Tear, break, or use scissors to cut the anchos into small strips or pieces. Combine them with the bean in a large bowl and add enough water to cover by 1 inch. Let soak for at least 6 hours or overnight.

2. Pour the oil into a 3-quart saucepan over medium heat. When the oil starts to shimmer, add the carrot, celery shallots, garlic, cinnamon, and allspice. Reduce the heat to medium-low, cover, and cook the vegetables slowly until they start to become tender, about 10 minutes.

4. Cover and gently cook until the beans are very tender, 1 to 2 hours, depending on the age of the beans. Add the salt, cook for a few more minutes, then let cool for 10 to 15 minutes.

5. Use a handheld immersion blender to puree the soup, then taste and adjust the salt if needed. (Alternatively, you can puree it in a blender or food processor. If you are using a blender, be sure to remove the center cap on the lid and cover with a dish towel to let steam escape, and work in small batches to avoid splattering the soup.

6. Divide it into 4 portions and use immediately, refrigerate up to 1 week, or freeze in small containers or heavy-duty freezer-safe resealable plastic bags, pressing as much air out of the bag as possible before sealing. It will keep frozen for several months.
Posted by Laine at 6:36 AM