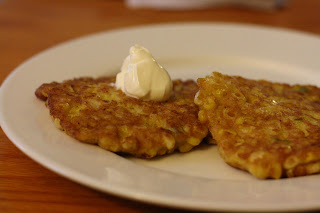 Sick of sweet corn yet? Not me! I've had this recipe bookmarked for quite some time, but finally got around to making it this week. I was pretty excited for corn fritters myself, but when I saw my husband's eyes light up as he took his first bite, I know I'd found a winning recipe. The recipe suggests sour cream, salsa, and other condiments, but these are perfect by themselves. Despite being fried, the whipped egg whites make these fritters wonderfully light, although I still may try using less oil/butter next time, and perhaps a bit of a flavored oil like sesame. Next time I'll probably try adding in some other spices, like ancho chile powder and smoked sea salt. I used a one-fourth cup measure to measure out my fritters; this recipe made 8. Although they won't be as crispy as when fresh out of the hot oil, the leftovers are still delicious as part of lunch or for a snack.

Sweet Corn Fritters
from The Daily Green
Originally published in Edible: A Celebration of Local Foods by Tracey Ryder and Carole Topalian.
Makes 4 to 6 servings 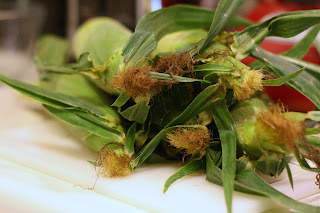 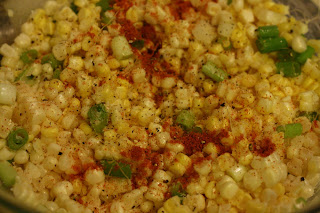 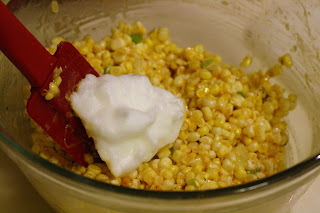 2. In a large skillet, heat the oil and butter over medium heat until the butter has melted. Carefully drop some of the corn mixture by tablespoons in to the hot oil, taking care not to crowd the pan. Cook each fritter until browned, about 2 to 3 minutes. Turn each fritter over and brown the other side, about 1 to 2 minutes. Remove the fritters to a platter lined with paper towels. Sprinkle lightly with salt, if desired. Repeat until all of the corn mixture has been used. Serve hot with some broiled tomatoes, a salsa made with chopped avocado, mango, lime and cilantro, and sour cream, if desired. 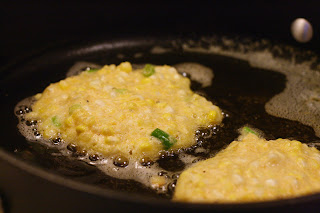 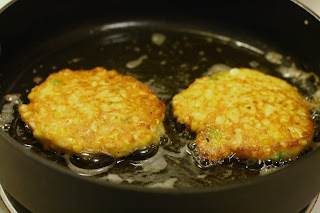