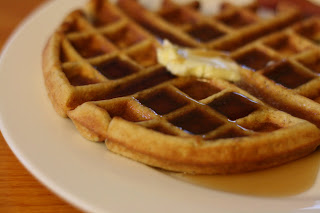 Maple is one of my favorite flavors in the world. From maple-walnut fudge, to maple-glazed ribs, to maple syrup drizzled over warm pancakes and waffles, I love it all. So when I saw waffles with maple syrup in the batter, I knew they were for me. And served alongside a side of bacon? Pure heaven, on cold winter mornings or even warm summer evenings.

I used all-purpose flour, but next time I'm going to try these waffles with white whole wheat flour instead. White whole wheat usually substitutes perfectly for all-purpose, but I usually try recipes as written the first time. The only slightly tricky part of this recipe is whipping the egg whites; if you're not used to it, you can overwhip or underwhip the egg whites quick easily. I started whipping egg whites when I was just a little girl and I used to ask my dad to let me whip the egg whites (by hand!) when we would have waffles for breakfast on Saturday mornings. It is much easier to whip egg whites with my Kitchenaid mixer these days, but learning to whip them by hand gave me a much better idea of the different stages (soft peak, stiff peak, etc.) and how fast they transition between stages. If you're afraid of overwhipping the egg whites, you can whip them by hand, although it will take significantly longer and give you a good arm workout.

Maple Oat Waffles
from Good to the Grain

Oats and maple syrup are a natural breakfast combination. Here the syrup is stirred into the batter and used in place of sugar, and two grades of oats are used-bran and flour. The oat bran is soaked in warm milk to soften before being stirred into the batter After the batter is stirred together, egg whites are whipped separately and then folded into the thick batter for loft and tenderness. One thing that's crucial to the success here, even more than in other waffle recipes: Butter the waffle iron generously, as a crisp crust really makes the different in these waffles.

1. Turn the waffle iron to its highest setting. Even if you don't normally heat it this high, these waffles comes out best when cooked at high heat.

2. Pour the oat bran into a small bowl. Bring 1 c. of the milk to just shy of a boil. Add the hot milk to the oat bran and stir, then set aside to soften while you gather the rest of the ingredients.

3. Sift the dry ingredients into a large bowl, pouring back into the bowl any bits of grain or other ingredietns that may remain in the sifter.

4. Pout the egg whites into the clean bowl of a standing mixture and the yolks into a medium bowl. Add the maple syrup and vanilla to the egg yolks and whisk until thoroughly combined.

5. Add the remaining 1 cup of milk to the oat brain-the cold milk will cool the lingering heat of the brain. Pour the oat mixture into the maple syrup mixture and stir to combine.

6. Using a spatula, add the wet ingredients to the dry ingredients and gently combine. The batter will still have fine lumps throughout; resist the urge to stir them in.

7. To whip the egg whites, attach the mixing bowl and the whip to the mixer and turn the mixture to high speed. As the whites whip, they will become frothy and begin got increase in volume. Add 1 tablespoon sugar. Next they will turn thick but very soft. Continue whipping until they are fluffy and glossy and hold their peaks, like clouds or cotton candy, about 3 minutes total. If they are overwhipped, they'll crack and look mealy. If that happens, throw them out and start over. 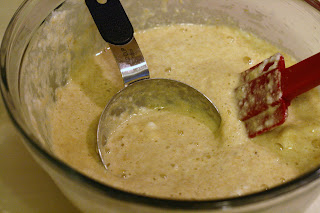 9. The light batter needs to be griddles on the waffle iron just as soon as you finish mixing it; it will deflate quickly if left to sit, chilled or otherwise.

10. Brush the waffle iron generously with butter. Using a ladle or measuring cup, scoop 1/2 cup of batter on the spaces of the iron. Promptly close, and listen for the iron to sigh as the batter begins to cook. The smell wafting from the iron starts out like a freshly kneaded loaf of bread, then becomes toasty. Remove the waffle when the indicator light shoes that it is done, or when a quick peak shows that it has turned a dark golden-brown, 4 to 6 minutes. Remove the hot waffle with a fork and repeat with the remaining batter. 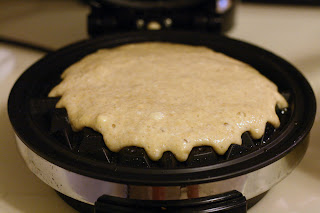 11. These waffles are best eaten hot, right off the iron, with a thin slab of butter melting on top and maybe a bit of jam.
Posted by Laine at 7:43 PM