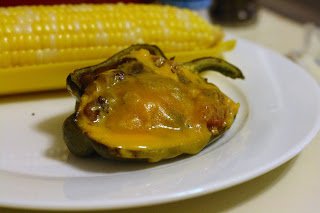 I impulsively bought three bell peppers at the farmer's market with no particular recipe in mind, but a vague notion of making stuffed peppers in the back of my head. After indulging in too much pork at The Haze BBQ, I thought it would be nice to have a vegetarian dinner and threw together a simple stuffed pepper recipe with what I already had on hand at home. This recipe is infinitely flexible and can be scaled up or down to feed any number of people and a great quick and easy vegetarian dinner for any night of the week.

1. Preheat oven to 400 degrees F. Place the peppers cut-side down on a lightly greased baking sheet. Roast 25 to 30 minutes or until peppers are tender and their skin starts to brown. Remove peppers from oven and increase heat to broil. 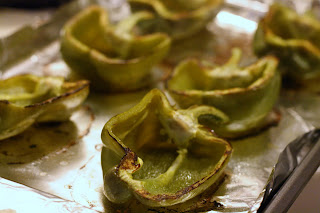 2. Spoon 1/4 c. rice into each of the pepper halves and top each with 1 T. salsa. Place a cheese slices on top of each pepper. Return peppers to oven until cheese is melted and just starting to brown, 4 to 6 minutes. 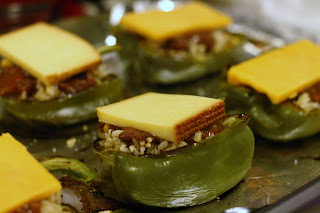