Shinji Muramoto is one of, if not the most, innovative chefs in Madison and when I found that he had attached himself to a barbeque restaurant that I had to go. The Haze BBQ is a joint venture of Chef Muramoto of Restaurant Muramoto and Sushi Muramoto, pastry chef Daniel Almquist of Lombardino's fame, and Justin Carlisle of the legendary Harvest. With three culinary heavy-hitters like this in the kitchen, I had high expectations for this new American and Asian BBQ joint in the former Kushi Bar location. And I can tell you I was not disappointed. The Haze offers gourmet meals in a relaxed atmosphere at an affordable price for both lovers of barbeque and Asian cuisine. Locavores will also be happy to know that Haze sources their meat and produce from local producers.

My meat of choice is generally pork, so I opted for the pork combo plate so I could sample the Eastern pork, char-sui (I always thought it was char-siu, but this is how it is spelled on the menu), and the Western pork, pulled pork, along with two sides (I chose baked beans and pickled Asian salad). The baked beans were not just navy beans in barbeque sauce, but a spicy mixture of different beans with a distinct component I recognized and spent a good part of the meal trying to identify with no success. Maybe it'll come to me in the middle of the night. The pickled Asian salad was spicy, crunchy, and a nice respite from the heavier meat and beans that composed most of my meal. Now on to the main event-the pork. Eastern or Western, the pork was fantastic, but the Eastern definitely has an edge (what would you expect from Shinji Muramoto?). The pulled pork was moist, flavorful, covered with a house-made traditional sauce, and heaped on Texas toast. But the char-sui was succulent and tender with a sauce so good I ate every bite of the white rice the pork was resting upon. I had an Ale Asylum porter alongside my meal; the beer list is short, but respectable, with a decent number of local choices. 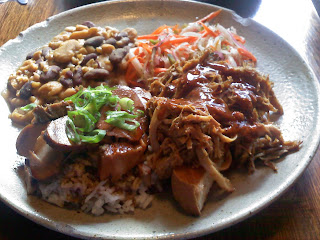 My husband had the brisket combo plate, and again we both agreed that the Eastern version was superior. He had the house-cut fries and the cheese curds for sides. Both the cheese curds and french fries were good, but not particularly special, although deep-fried cheese is nearly always going to be delicious. 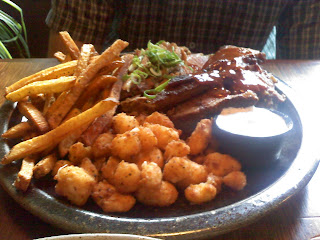 Although were stuffed, we couldn't resist some monkey bread pudding, as we are both big fans of bread pudding and sample it every chance we get. Boy were we glad we did! This bread pudding was soft, rich, and cinnamon-y, topped with a delicious icing that was sweet, but not overly so. Neither one of us could help saying "mmmmm" with every bite of this amazing dessert. 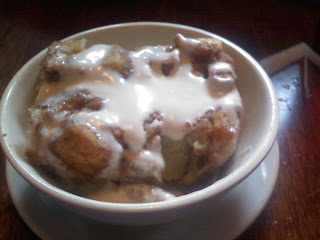 The Haze BBQ is located at 106 King St. in Madison, just off Capital Square. If you can't make it to the restaurant, they do deliver (which I may be using to try a bahn mi in the near future). Visit The Haze BBQ website for hours and more details.
Posted by Laine at 2:01 PM