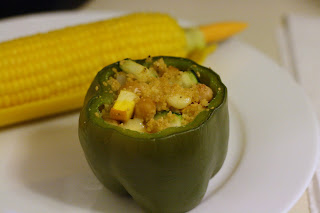 This week I won't be participating in Meatless Monday, as it's my husband's birthday and I'm going to make  him a meal he loves, which most definitely involves red meat. After going out to Famous Dave's for his birthday last night, having a non-vegetarian (and not very healthy) meal tomorrow, and having birthday cake (I made a pineapple upside-down cake), I wanted to have a healthy, vegetarian dinner on Sunday. We've been having corn-on-the-cob every Sunday lately since it's in season and we can't get enough of it, so I needed something that goes well with corn. I bought some beautiful, organic peppers at the farmer's market, so I decided to try out a new stuffed pepper recipe.

This recipe could fill 8 or more peppers (depending on size), but I filled 4 peppers and had three cups of couscous mixture left over that will make a nice lunch for one or two later in the week. How many peppers the stuffing fills varies greatly depending on the size of the peppers you can find. The filling is delicious all by itself, so fill as many peppers as you want and save the remaining couscous salad to have for a lunch or a quick dinner later in the week.

Couscous and Feta Stuffed Peppers
adapted from Epicurious, who got it from Self
serves 6 to 8  (or more)

1. Preheat oven to 350°F F. Coat a small baking dish with cooking spray.
2. Bring the broth to a boil in a saucepan, add the couscous, cover the pan and remove it from the heat. Meanwhile, bring a large pot of water to a boil. Cut the stems and top half inch off the bell peppers and scoop out the seeds and membranes. Boil trimmed peppers for 5 minutes, then drain them upside down. 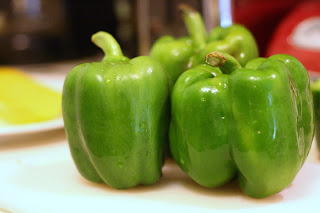 3. Heat oil in a nonstick skillet. Add onion, zucchini, yellow squash, oregano, and salt. Cook, stirring frequently, for 5 minutes or until vegetables are softened. Remove from heat and stir in the chickpeas. Using a fork, scrape the couscous into the skillet and toss with the vegetables. Stir in the crumbled feta. Place peppers upright in the baking dish and fill them with the couscous mixture. Bake 15 minutes. Serve immediately. 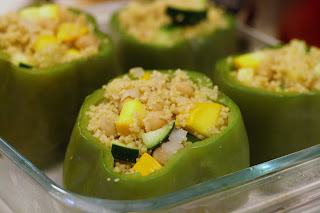