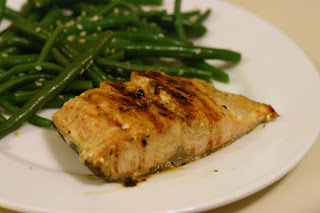 A few months ago I decided to try fish again. My whole life I'd always been a person who didn't like fish, with the exception of canned tuna and my dad's cornmeal-crusted fish sticks. But as I've aged I've come to like many foods that I never thought I would so I decided to give fish another shot. I started with salmon, frying it in a pan with a bit butter and seasoning with just salt and pepper. And I liked it! But I've been stuck in a bit of rut since then trying to decide how I want to make salmon and although I've made it many times since the initial rediscovery, I haven't tried much with it. It's definitely time to branch out, and I'm starting with a simple, but delicious recipe from the June 2010 issue of Food and Wine magazine. This recipe is intended for the grill, but I halved the recipe and made it in a cast-iron grill pan on the stove. This can also be made into delicious sandwiches with the addition of bacon, lettuce, and thinly sliced Granny Smith apple. I served Sesame Green Beans as a side with simple, tasty dish.

1. Light a grill (or preheat a grill pan, in my case). In a small bowl, mix the mustard, horseradish and honey. Rub the salmon with oil and season with salt and pepper.

2. Grill the salmon over moderate heat, skinned side down, until lightly browned, about 3 minutes. Turn and grill for 3 minutes longer, until the salmon is almost cooked through. 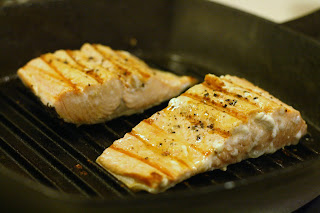 3. Turn the salmon again and spread each fillet with 1 tablespoon of the horseradish glaze. Turn and grill until glazed, about 30 seconds. Serve the remaining glaze on the side.
Posted by Laine at 7:09 PM