As I mentioned last week, I picked up my first bag of cacao nibs, so naturally I've gone on a mini culinary mission to use them in as many ways as possible. Cacao nibs have all of the nutritional benefits of chocolate without the added sugar and fat, so they're a guilt-free way to sneak a little something special into meals or snacks without turning them into dessert. And who doesn't like a little chocolate at breakfast? The cacao nibs are a bit too bitter for most people on their own, but are balanced out perfect by the rich nuts, seeds, and coconut and sweet maple syrup in this granola. The myriad flavors have ample time to blend as they bake low and slow and gain a patina of golden brown toastiness, the modest temperature necessary to avoid burning the cacao nibs. Next time I'm likely to throw in some flax or chia seeds for extra omega-3s or quinoa or millet for extra crunch, and I would encourage you to experiment with both the ingredients to you can't live without or just the ones you've got laying around the house. Dried fruit would certainly be lovely addition as well, so feel free to toss in a handful of dried cranberries, raisins, or dried cherries after the mixture cools or when serving. As is generally my wont with granola, I piled it high on plain yogurt, but it would also make a great snack for a long hike or delicious ice cream topping.

1. Preheat oven to 250 degrees. Combine all dry ingredients together in a large mixing bowl. Add vanilla and maple syrup and mix well to combine.

2. Spread mixture in an even layer in a cookie sheet sprayed with cooking spray. Bake, stirring occasionally, for about one hour, or until dry. Remove from oven, let cool, and store in an air tight container. 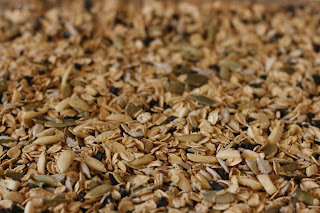