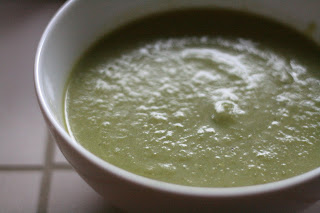 After one of my favorite farmers told me last week was their final week of asparagus, I was worried it would disappear entirely from the market. There's no denying that end of asparagus season is still nigh, but I was still able to pick up another bunch for the delicious recipe.

Leeks are a kind of magical ingredient. Potato and Leek Soup, though composed of just a few elements, is packed with an unbelievable amount of flavor and so much more than it's humble ingredients would suggest on paper. Paired with the already delicious asparagus, leek again performs culinary alchemy to elevate this vibrant soup to something quite refined. The butter and sour cream add the perfect touch of richness, making each bite silky and creamy but not heavy. Just a touch of lemon juice at the end sharpens all the fresh notes of the soup and makes it really at home in the warmer months. Early in spring this would be amazing made with ramps, but that glorious ingredient had sadly long since disappeared for the year.

With the requisite slice of crusty bread, this was just my Meatless Monday dinner, but I think it would make a splendid first course for a dinner party or companion to a sandwich or salad. If you're still shoveling in the asparagus like I am, I urge you to make this lovely soup before the opportunity escapes and it's too hot to even dream of firing up the stove for dinner.

1. In a saucepan cook the leek and the garlic with a pinch of salt in the butter over moderately low heat, stirring, until the leek is softened, about 3 to 5 minutes.

2. Add the asparagus, the broth, and 1/2 cup water, and simmer the mixture, covered, for 10 to 12 minutes, or until the asparagus is very tender. Purée the mixture in a blender or with an immersion blender until it is very smooth.

3. Whisk in the lemon juice and sour cream and season with salt and pepper to taste. Cook the soup over moderately low heat until it is heated through, but do not let it boil.
.