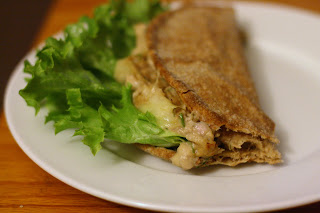 I make it a point to have fish once a week, sometimes in elaborate preparations, but often in something as simple as tuna salad. But just because tuna salad is quick and easy, doesn't mean it has to be boring. This flavorful tuna salad came together as I was poking around in my fridge and tossing in ingredients on pure instinct. I knew this recipe was a success when my husband asked where I found the recipe-I know when he thinks it came from a professional that I did a good job. Dill is the most dominant flavor in this recipe, a pure injection of freshness that also pairs extremely well with salmon, so feel free to substitute salmon for the tuna if you like. I gave a range of amounts for the mayo and dijon mustard because the intensity of flavor of the Dijon mustard can vary widely and there is a range of preferences on the chunkiness of tuna salad. In general, I prefer two parts mayo to one part Dijon mustard, though the overall amount of sauce I prefer changes from day to day. So the next time you make a tuna salad sandwich, take a couple extra minutes to throw in some delicious add-ins and make it something a little special.

1. Preheat regular or toaster oven set on broiler setting. Combine tuna, mayo, mustard, shallots, and dill in a small bowl and season with salt and pepper to taste.

2. Spread half the tuna mixture over one half of each pita and top with shredded cheese. Broil until cheese is melted and just starting to brown and tuna mixture is warmed through, 3 to 8 minutes, depending on the strength of your broiler (which can vary widely, so keep a close eye on it). Place a lettuce leaf on each pita and fold in half while still warm. Serve immediately.
Posted by Laine at 5:04 PM