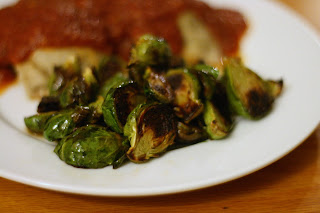 Before I made this recipe, I'd never tried Brussels sprouts. My dad absolutely hated Brussels sprouts as a kid, so they didn't make an appearance in my childhood meals. That, in combination with their notoriety in the vegetable world, meant that I've never made the effort to try them. But when they made an appearance in my CSA box, I went straight for my favorite vegetable cookbook and picked out a recipe. And I was definitely not disappointed! The deep flavor of caramelization combined with a rich butter sauce accented with orange and maple flavors was absolutely divine. I now see how Brussels sprouts are a traditional Thanksgiving dish for many families.

1. Preheat the oven to 475 degrees F. Line a large (18x13x1-inch) heavy-duty rimmed sheet pan with a piece of parchment paper.

2. In a mixing bowl, toss the Brussels sprouts with the olive oil and 1/2 teaspoon of the salt. Arrange the sprouts in one layer, cut side down, on the parchment. 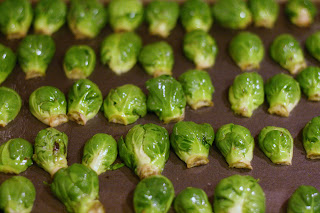 3. Roast until brown and tender, 15 to 18 minutes. (The tops will be dark brown and crispy and the sprouts should feel tender when pierced with a paring knife. Transfer the sprouts to a mixing bowl.

4. Combine the balsamic vinegar, maple syrup, orange juice, and orange zest in a small saucepan. Heat the mixture over medium heat just until it's hot (you will see a bit of steam), but not simmering. Remove the pan from heat and add the cold butter, several pieces at a time, whisking constantly until the mixture is smooth and creamy. (Don't reheat the mixture or the butter will break and the sauce won't be creamy). Pour the sauce over the sprouts and stir thoroughly but gently until most of the sauce has been absorbed. Transfer the sprouts and any remaining sauce to a serving platter or dinner plates. 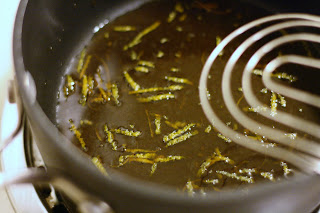