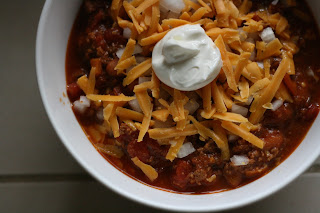 Chili is one of the reasons to get excited about fall. On my list of culinary goals, making that first batch of chili lies shortly after getting my hands on as many pumpkin-based treats as possible. And if the season's motivation wasn't enough, this recipe fit perfectly into the theme I chose for this year's football snacks - matching the snack (and beer, when possible) to the city/region of the Packer's opponent. In week two, the Packers played the Washington Redskins, with DC being home to the famous Ben's Chili Bowl. (Yes, I considered making chili to use in a half-smoke, put opted for a bowl of chili with some leftover Zucchini Corn Muffins instead.) Leftovers were also somewhat inauthentically repurposed Cincinnati Chili for the week 3 game, and the bit remaining in the freezer just may turn into Coney Dogs for the Lions game on October 6th (despite their origins, Coney Dogs have become a signature dish of Detroit).

I definitely won't argue that chili is a dish typically suited to big batches, but when you don't have a lot of people to feed and love to tweak and experiment like I do, a recipe for two is just perfect. It's often not straightforward to adapt a big batch recipe down to a modest meal, but when the source is America's Test Kitchen, there's no reason to worry that the scaled recipe is a pale comparison to the original. This recipe has the perfect level of spiciness, bold enough to excite the taste buds, but not so assertive that the smoky cumin, coriander, and garlic disappear. There's a nice balance between the meat, beans, and veggies - the chili is stick-to-your-ribs hearty without being a total gut-bomb, satisfying the heartiest of appetites without scaring away those who aren't total carnivores. Though ATK's specialty is precise and thorough perfection of recipes, I can already see myself trying some of my own versions - poblanos, black beans, and pork, perhaps? Green chilies, white beans, and chicken? Though perfection in its own right, like any good recipe, this one inspires further culinary creativity.

1. Heat the oil in a medium saucepan over medium heat until shimmering. Add the onion, bell pepper, garlic, chili powder, cumin, coriander, pepper flakes, oregano, cayenne, and 1/4 teaspoon salt, and cook, stirring often, until the vegetables begin to soften and the spices are fragrant, 3 to 5 minutes.

2. Stir in the beef and cook, breaking up the meet with a wooden spoon, until no longer pink, about 2 minutes.

3. Stir in the beans, diced tomatoes with their juice, and tomato sauce, and bring to a boil. Cover, reduce the heat to low, and simmer, stirring occasionally, for 45 minutes.

4. Uncover and continue to simmer, stirring occasionally, until the beef is tender and the chili is dark, rich, and slightly thickened, about 15 minutes longer. (If at any time the chili begins to stick to the bottom of the pot, stir in 1/4 cup water). season with salt to taste and serve.
Posted by Laine at 8:53 AM