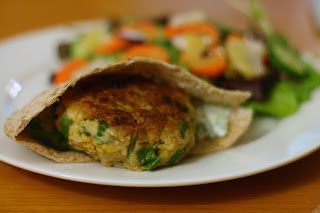 Although I was making veggie burgers on a regular basis, I haven't made anything of the sort in a while, and it's about time that I returned to a recipe of that sort for a satisfying vegetarian entree. I love Veggie Burgers Every Which Way

by Lukas Volger, but this time I turned to America's Test Kitchen, a pantheon of culinary knowledge, for this delicious chickpea cake recipe. The beans really fill you up, but the scallions and cilantro keep the flavor light and fresh, complemented by a nuanced flavor from the garam masala whose aroma instantly fills the kitchen as soon as the cakes hit the pan. I served these chickpea cakes in whole wheat pita halves with lettuce and the cucumber yogurt sauce with a nice side salad, but they would also be great served on their own with the sauce or on top of a salad.

Although the recipe calls for peeling the cucumber, I chose not to because I like the extra crunchiness and color that you get from leaving the skin of the cucumber on. On the other hand, seeding, salting, and draining the cucumber is important because otherwise the sauce will be quite watery, even when using Greek yogurt, which is much thicker than regular yogurt. If you don't have time to make fresh bread crumbs, substitute about 1/2 cup purchased bread crumbs, judging how much you need by the texture of the chickpea cake. Although shallots are preferable, minced white or yellow onion can be substituted in its place (keeping in mind that shallots are smaller than onions). Don't let not having the exact ingredients stop you from trying a recipe-you might miss out on a great meal and you may even create an even better dish!

1. Adjust an oven rack to the middle position and heat the oven to 350 degrees. Pulse the bread in a food processor to coarse crumbs, about 10 pulses. Spread the crumbs out over a rimmed baking sheet and bake, stirring occasionally, until golden brown and dry, 10 to 12 minutes. Let cool to room temperature.

2. Meanwhile, toss the cucumber with 1/2 teaspoon salt in a colander and let drain for 15 to 30 minutes. Combine the drained cucumbers, 3/4 cup of the yogurt, 2 tablespoons of the scallions, and 1 tablespoon of the cilantro in a bowl and season with salt and pepper to taste. 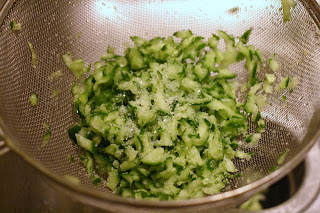 3. Pulse the chickpeas in a good processor to a coarse puree with large pieces remaining, about 8 pulses. In a medium bowl, whisk the eggs, 2 tablespoons of the oil, garam masala, cayenne, and 1/8 teaspoon salt together. Add the processed chickpeas, breadcrumbs, remaining 1/2 cup yogurt, remaining scallions, remaining 3 tablespoons cilantro, and shallot until just combined. Divide the chickpea mixture into 6 equal portions, about 1/2 cup each, and lightly pack into 1-inch-thick patties. 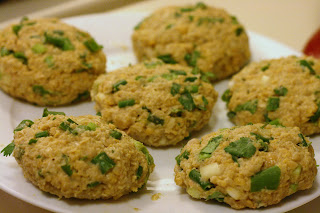 4. Heat 2 teaspoons more oil in a 12-inch nonstick skillet over medium heat until shimmering. Carefully lay half the patties in the skillet and cook until well browned on both sides, 8 to 10 minutes. 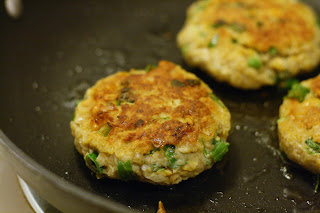 5. Transfer the cakes to a plate and tent loosely with foil. Return the skillet to medium heat and repeat with the remaining 2 teaspoons oil and remaining burgers. Serve with the cucumber-yogurt sauce and lime wedges.
Posted by Laine at 5:46 PM