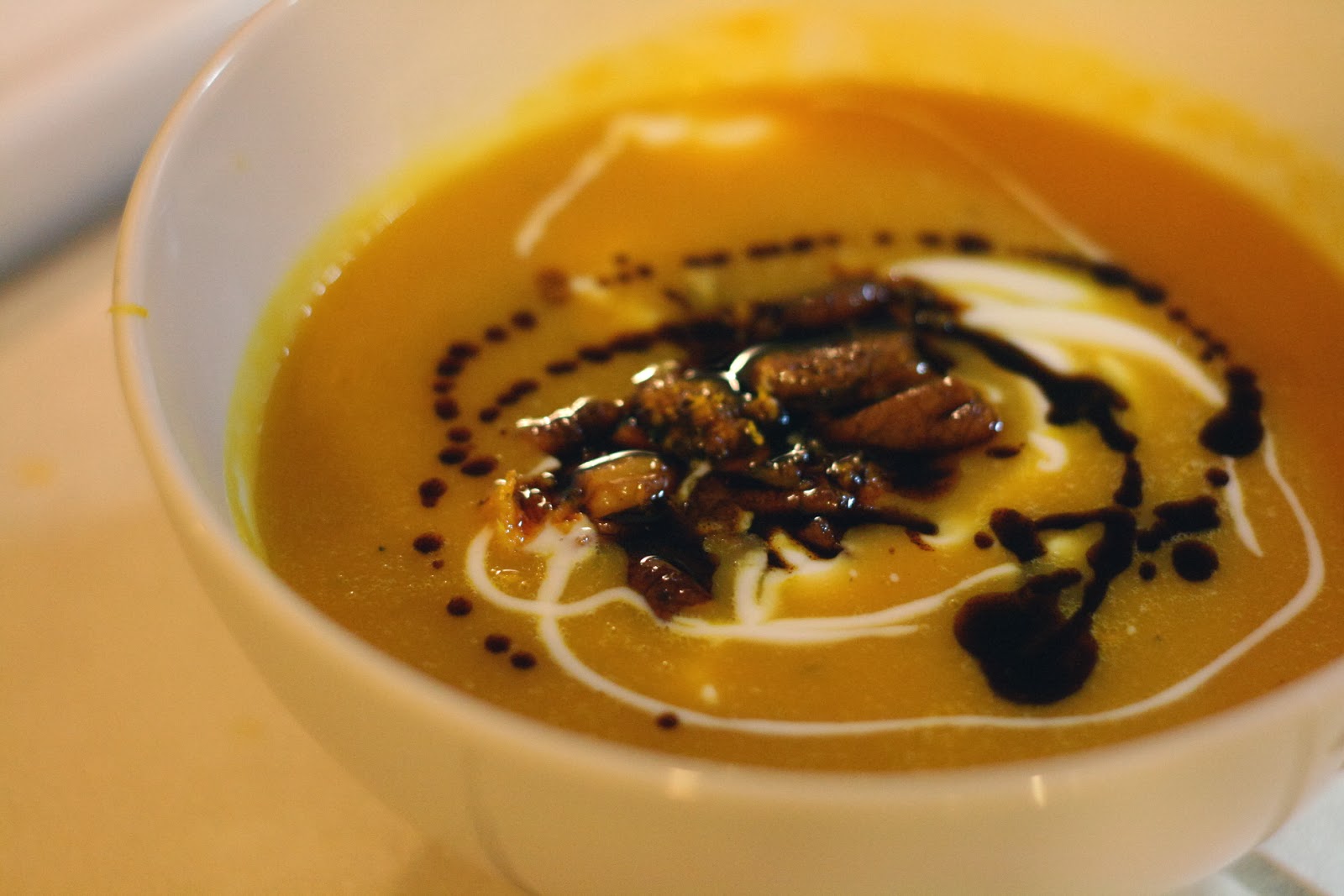 I may sound like a broken record, but I just can't say enough good things about Joe Yonan's cookbooks. His easy and delicious recipes make each meal something to look forward to, even when my dining companions are just the characters in a novel I'm reading. Making a concentrated soup base to switch up with each meal is an absolutely genius way to both plan ahead and decide on the fly what have for dinner, and as I predicted, my second foray into that territory was just as wonderful as the first.

The sweet potato soup base, as its name would imply, has an inherent sweetness, but thinning it with orange juice adds an extra nuanced layer balanced with enough acidity to keep it from becoming cloying. Creme fraiche and the spiced oil add richness, along with their respective tanginess and smokiness, with a final accent of toasted pecans to contrast the sumptuously silky soup. Each ingredient is a delightful touch even solo, but together they achieve a sublime, delicious balance.

After enjoying the soup base and two variations, I'm definitely ready to but my personal touch on the final portion in my freezer. And after that's gone, it's on to spicy black bean soup base!

1. Pour the soup base into a small saucepan over medium heat. Whisk in the orange juice and water, adding more water if you want a thinner consistency. Cook until the soup is bubbling hot, 3 to 4 minutes. Taste and add salt if needed. Decrease the heat to low, cover, and keep it hot.

2. Heat a small skillet over medium-high heat. Add the pecans and cook, stirring occasionally, until they are fragrant and start to darken, 2 to 3 minutes. Pour in the oil, stir in the pimenton, and cook for another 30 seconds to dissolve the spice. Use a heatproof spatula to scrape the spiced oil and pecans into a small bowl.

3. Pour the soup into a serving bowl, dollop the crème fraîche in the middle, and top with the pecans and spiced oil. Sprinkle the orange zest on top, and eat.

3. Pour the oil into a 3-quart saucepan over medium heat. When it starts to shimmer, add the carrots,
celery, leek, thyme, and a pinch of salt. Stir to combine well, then decrease the heat to low, cover the
pot, and allow the vegetables to sweat in their own juices until very soft, 10 to 15 minutes. (Take care
not to allow the vegetables to burn.)

4. Scrape into the saucepan the soft flesh from the roasted sweet potatoes, add the curry powder, and stir
to combine, mashing the sweet potato flesh with a spoon. The mixture will be chunky. Stir in the stock
and combine well. Bring the mixture to a boil, then decrease the heat so the mixture gently simmers, and
cook, covered but with the lid slightly ajar, for about 15 minutes to let the flavors meld. Allow the mixture
to cool slightly, then remove and discard the thyme.

5. Use a handheld immersion blender to puree the soup base, which will be very thick. (Alternatively, you
can puree it in a blender or food processor. If using a blender, be sure to remove the center cap on the
lid and cover with a dish towel to let steam escape, and work in small batches to avoid splattering the
soup.) Taste and add salt if needed.

6. Let the soup base cool to room temperature. Divide it into 4 portions and use immediately, refrigerate
for up to 2 weeks, or freeze in small containers or heavy-duty freezer-safe resealable plastic bags,
pressing as much air out of the bag as possible before sealing. It will keep frozen for several months.
Posted by Laine at 4:00 PM