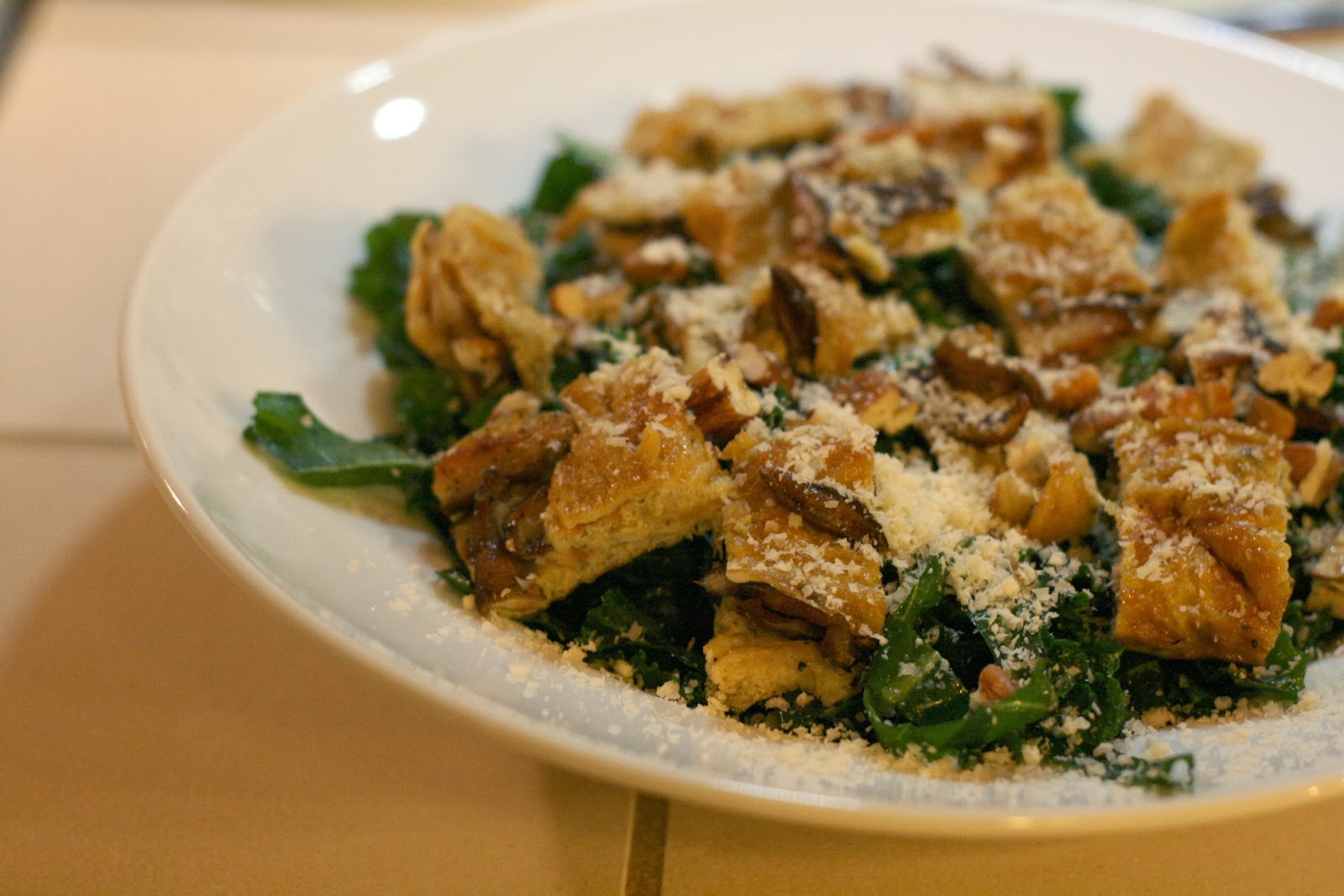 It's not often that I discover a recipe that is truly a new culinary concept for me. Eggs are a staple food in my diet and it seems like I've prepared them nearly every possible way. More times than I can count, especially when I'm pressed for time, my dinner has been a veggie-packed frittata or omelet with a side salad and toast. With the thousands of bites of frittata and salad I've taken so perilously close to each other, I can't believe I'd never thought to cut up an omelet to top my salad until this recipe. But I'm here to tell you that it's fantastic!

It surely doesn't hurt that this particular omelet is one of savoriest you can make. Umami powerhouses miso and mushrooms team up in the omelet itself and with a topping of Parmesan cheese, this savoriness can scarcely be rivaled. Miso isn't a terribly common ingredient, though with the mainstreaming of sushi, it's finding its way into a lot more restaurants and home kitchens. I'll confess it might seem like a big investment for being used in a such a modest amount, but it's one of the best ingredients to have around for adding a quick punch of umami to a dish, especially when eating vegetarian. (But if you're in a real pinch, a bit of soy can almost do the trick.) It takes a hearty green like kale to hold up to the robustly flavored omelet and the spice of vinaigrette livens up every bite. Toasted pecan bits finish the dish with a rich and toasty note with a mere slice of crusty bread all that is required to turn this into full meal.

adapted from Serve Yourself by Joe Yonan
serves 1

1. Sprinkle the pecans into a small skillet over medium-high heat. Cook, shaking the pan frequently, until the nuts start to brown and become fragrant, a few minutes. Immediately transfer them to a plate to cool; if you leave them to cool in the pan, they can burn. Once they are cool, chop them.


2. Whisk together the miso and water in a small bowl, then whisk in the egg until well combined.
3. Heat the olive oil in a small, preferably nonstick, skillet over medium-high heat. Once the oil shimmers, add the mushrooms and cook, stirring occasionally, until they collapse. Spoon the mushrooms onto a plate, leaving as much oil in the pan as you can.
4. Return the skillet to the heat and reduce the heat to medium. Add a little more oil if the pan seems dry. Pour in the miso-egg mixture; cook briefly, just until it sets on the bottom; lift the edges of the set egg on one side and tilt the pan toward that side so the uncooked egg runs underneath, and do this a time or two more until the egg isn’t runny on top. Spoon the mushrooms down the middle and fold the eggs over the mushrooms to form an omelet. Cook briefly on each side, until the omelet is just cooked through. Transfer it to a cutting board to cool.
5. Toss the massaged kale with the vinaigrette in a serving bowl. Once the omelet has cooled, chop it into bite-sized pieces. Add the omelet pieces and cheese to the kale and toss to combine, then grind a generous amount of pepper on top. Sprinkle on the pecans, and eat.

1. Smash the garlic with the side of a chef’s knife, sprinkle with the salt, and finely chop the two together. Smear it with the side of the knife to create a paste, and transfer it to a small glass jar.
2. Add the lemon juice, chili oil, olive oil, mustard, honey and several grinds of black pepper. Screw on the jar’s lid and shake to combine. Taste and add more salt as needed. Refrigerate for up to 2 weeks.
Posted by Laine at 4:00 PM