Grilled Tacos with Poblanos and Corn 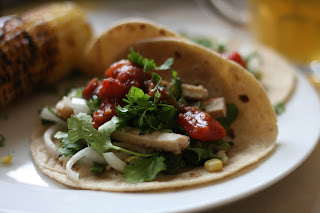 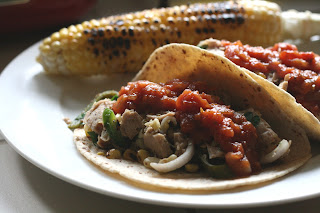 This began as a tuna tacos, morphed into pork tacos, and has ended up as my choose-your-own-protein-adventure taco recipe of the summer. Although I've found it suits nearly any protein, for me this really started with the poblanos and corn.

It would be hard to pick the one thing I most anticipate arriving at the farmers' market, but it just might be sweet corn. I pick up a few ears every week that it's available to grill and slather in butter, and that preparation is so perfect that sometimes I forget to use it anything else. Poblanos are probably my favorite pepper, the perfect combination of flavor and heat for salsa, tacos, or nearly any other Mexican dish you throw at them. It was with these two ingredients that I cemented the idea of grilling tacos for dinner one Sunday night, the protein of choice (tuna steak), one of convenience rather than inspiration. My search for fish tacos led to the typical white fish recipes and my base recipe, courtesy of Eating Well. When I discovered that my hearty tuna steak was a delicious choice in lieu of lighter tilapia, I was prompted to try additional proteins, finding them just as successful. Each one complements and contrasts differently, but the simple dressing of bright lime, smoky cumin, and earthy oregano finds nearly universal success. You can easily further dress up these tacos with jalapeno slices, cilantro, and salsa if you like, but even in their simplest incarnation you won't be left wanting.

1. Prepre a gas grill over high heat. Meanwhile, brush cut sides of onion, poblano, and corn with oil and season with salt and pepper.

2. Once grill is hot, reduce to heat to medium high and brush with oil. Add onion, poblano, and corn and grill, turning periodically, until surfaces are blistered and blackened, about 4 to 6 minutes per side for the onion and poblano, 2 minutes for the corn (four sides). Remove from heat and allow to rest until they can be easily handled. Remove blackened skin from poblano, if desired, slice pepper and onions, and place in a medium bowl. Remove 1/4 cup corn from corn cob, add to the bowl, and toss everything with lime juice and spices.

3. Season tuna steak or pork cutlets with salt and pepper. Generously oil the grill again and add tuna or pork.

For tuna: Allow to cook until fish releases easily from the grate, about 4 minutes. Flip fish and continue cooking to desired level of doneness, usually about another 4 minutes for the other side. Remove fish from grill, allow to rest for a few minutes, and flake into large pieces.

For pork cutlets: Grill 2 to 3 minutes per side, or until internal mixture reaches 160 degrees F. Allow to rest for a few minutes, and thinly slice.

Add protein to vegetable mixture and toss to combine. 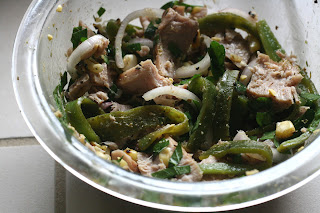 4. Wrap tortillas in paper towels and microwave until warm and pliable, about 30 seconds. Add vegetable mixture to tortillas, garnishing with salsa, jalapeno, and cilantro. Serve promptly.
Posted by Laine at 4:00 PM