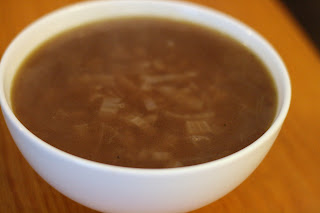 There aren't nearly the vast number of options for using up mass quantities of onions (particularly red onions) as there are for most vegetables, but fortunately there's one standby to rely on-French onion soup. Unfortunately, making French onion soup typically requires lots of time and patience, things I am often short on, but America's Test Kitchen shares my frustration and has perfected a recipe for Streamlined French Onion Soup. A small amount of red wine releases a huge bouquet of flavors, opening up the perfect balance of sweet onions, savory broth, and sharp balsamic vinegar. French onion soup is a relatively simply dish, relying greatly on the complex flavors developed as the onions caramelize, but also on broth, wine, and herbs so it's of the utmost important that each of these ingredients are high-quality to make this most of this soup. (If you don't have any homemade stock at the ready, which most people don't, I recommend Pacific Natural Foods broths.)


French Onion soup is typically made on the stove top, then divided into ramekins, topped with bread and cheese, and baked. This recipe also included instructions for the baking step, but without a baguette on hand, I opted to make the soup and pair it with a delicious grilled cheese (get some Hook's if you can find it). I only included directions for making the soup since that is the only portion of the recipe I tested, but I know that this would be delicious topped with a crusty baguette and generous helping of cheese, so grab a baguette and fire up the broiler if you are so inclined. Although this isn't soup surely isn't first date food, if you have a partner who loves you and a little bit of time, whip up this surprisingly simple but luxurious feeling soup for your next cozy night at home.
Streamlined French Onion Soup
from The Complete America's Test Kitchen TV Show Cookbook
serves 6

1. Melt the butter in a large Dutch oven over medium-high heat. Add the onions and 1/2 teaspoon salt and cook, stirring frequently, until the onions are reduced and syrupy and the inside of the pot is coated with a deep brown crust, 30 to 35 minutes. Add the chicken and beef broths, red wine, parsley, thyme, and bay leaf, scraping the pot bottom with a wooden spoon to loosen the browned bits, and bring to a simmer. Simmer to blend the flavors, about 20 minutes; discard the herbs. Stir in the balsamic vinegar and season with salt and pepper to taste.
Posted by Laine at 5:00 PM