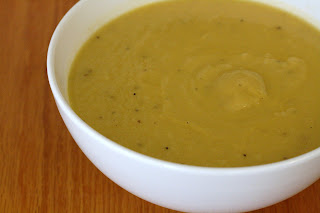 If you're a regular reader of this blog, you may have seen enough winter vegetable-based soup recipes to last you well into spring, but my CSA bounty has inspired me create yet another one, this time featuring celery root (also known as celeriac). Celeriac is a wonderfully flavorful, but underutilized, root vegetable, perhaps intimidating potential cooks with its knobby exterior, which makes it more difficult to clean and prepare. Celeriac can be utilized both raw or cooked and while it has a delicious celery flavor, it is also quite adept at taking on other flavors as well. This soup follows a classic formula-saute onions in fat, add vegetables and broth, simmer until tender, blend into silky deliciousness, and season to taste with salt and pepper. What sets this soup apart from that classic formula I so often utilize is the addition of a small amount of apple cider vinegar at the end, which was not a part of the original Bon Appetit recipe that inspired my soup. Many home cooks, myself included, often forget how much better a dish is with the addition of just a small amount of acid, like lemon juice or vinegar, at the end. In the same way that a small amount of salt brings out all the flavors in a sweet dish without making it salty, the small amount of vinegar added to the soup at the end enhances the flavors in the soup without making it overtly acidic. This soup is hearty and savory, most assuredly a fall and winter dish, but the silky texture and bright edge from the apple cider vinegar keep it from being too dense. Not suprisingly, if you like celery flavor, you'll like this soup, but the tartness of the apple and sweetness of the onions keep it from feeling like just a bowl of cooked and blended celery.

It was made clear to me that this simple combination of ingredients was far more than the sum of its parts when one of my coworkers, commenting on the inticing aroma of my lunch, said that it smelled like sausage-a compliment I most gratefully accepted. If I can turn a combination of fruit and vegetables into something even remotely reminiscent of sausage, I think I've done something right.

Celery Root and Apple Soup
adapted from Bon Appetit, via Epicurious
serves 6 as a first course, 3 as a main course

1. Melt butter in heavy large pot over medium heat. Add celery root, apples, and onion. Cook until apples and some of celery root are translucent (do not brown), stirring often, about 15 minutes. Add 4 cups broth. Cover and bring to simmer. Reduce heat to medium-low; simmer covered until celery root and apples are soft, stirring occasionally, about 25 minutes. Remove from heat; cool slightly.

2. Puree soup with an immersion blender (or, working in batches, puree soup in blender until smooth), adding more broth by 1/4 cupfuls to thin to desired consistency. Return soup to pot and stir in vinegar. Season to taste with salt and pepper and serve warm.
Posted by Laine at 1:07 PM