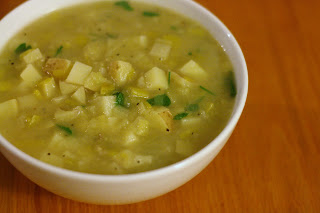 As hard as it was for me not to go back to the simple perfection of Julia Child's Potage Parmentier, which I have made time and time again, I thought it was about time I gave another leek and potato soup recipe a try. This recipe, like Julia Child's, is the height of simplicity. Every time I take a bite of leek and potato soup I am amazed at the depth of flavor in a dish with so few ingredients so I saw no reason to choose a more complicated recipe for my first foray away from the genius of Julia Child. And, as you can probably guess since I've decided to share, I was not at all disappointed by this recipe, even if it doesn't quite hold the special place in my heart that Julia's recipe does. Yet again, the simple combination of potatoes and leeks has come together in a perfect bowl of comfort that is so much more than the sum of its parts. Pureeing a small portion of the soup gives the soup a luscious creaminess, but maintains the hearty, rustic texture of the chunky potatoes and leeks. I can't explain exactly what makes potato leek soup so irresistable to me, but something about blending starchy, hearty potatoes and sweet, delicate leeks is absolutely transcendent. Your effort will be rewarded many times over with if you invest just a little bit of time and effort to make this delicious soup, as perfect for busy weeknight as it is for the first course at your Thanksgiving dinner.

Potato and Leek Soup
from Gourmet, via Epicurious
serves 2, generously 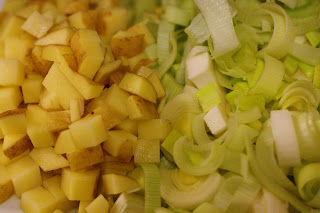 1. In a large heavy saucepan cook the leeks in the butter with salt and pepper to taste, covered, over moderately low heat, stirring occasionally, for 8 to 10 minutes, or until they are softened but not browned. Add the water, the broth, and the potatoes, peeled and cut into 1/2-inch dice, and simmer the mixture, covered, for 20 minutes, or until the potatoes are tender.


2. In a blender purée 1 cup of the soup, stir the puré into the remaining soup with the parsley, and season the soup with salt and pepper.