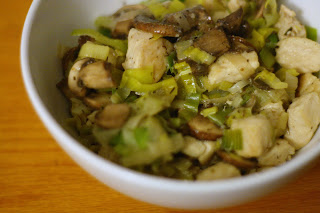 After a long day at work, bookended by scraping layers of ice off my car, this stew was a welcome bowl of comfort at dinnertime. This is the second recipe by Jamie Oliver that I've tried from the current issue of Food and Wine (the first being Light Smoked Salmon Caesar Salad, a slight adaptation), and I'm happy to report I've been really pleased with both. I thoroughly admire his work trying to improve school lunch programs through Jamie Oliver's Food Revolution and I'm pleased to discover that I'm also a fan of his work as a chef as well so far. I'd never cooked with leeks until a couple years ago, but I've really come to love their flavor, with Potage Parmentier being one of my favorite soups, despite being almost irreducibly simple. This stew is equally delicious as a long-simmered beef stew, but in a much different way. While both stews are hearty and perfect for a cold winter day, where the beef stew has deep, earthy flavors the flavor palate of this chicken stew is lighter and fresher, and isn't nearly as heavy a dish. I served this stew over brown rice, but it would also be great served over couscous, quinoa, or barley. 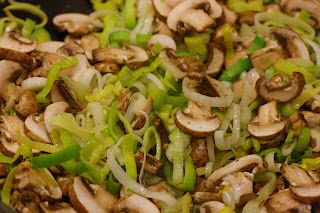 3. Simmer the stock over moderately high heat until reduced by half, about 2 minutes. Return the chicken, leeks and mushrooms to the skillet and simmer over low heat until warmed through, about 1 minute.

4. In a small bowl, blend the sour cream with the mustard and stir into the stew. Remove the skillet from the heat. Season the stew with salt and pepper and serve.
Posted by Laine at 8:38 AM