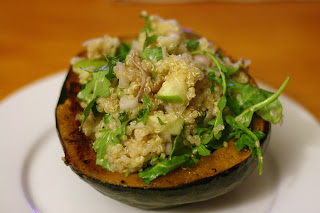 Michael Symon is one of my favorite celebrity chefs. I love the show Food Feuds and he's one of the most entertaining competitors on Iron Chef America, but I first became intrigued by this chef after reading about him in Michael Ruhlman's fantastic book, The Soul of a Chef. Food and Wine is one of my most-trusted recipe sources, but when the recipe is also such a fantastic chef, I can be pretty sure it's a winner. I really like quinoa and it's nutritionally one of the best foods out there, so I try to work it into my diet as often as possible. It's a complete protein and thus a great option for vegetarians, vegans, and people just trying to have a healthy diet that isn't so dependent on animal protein (and people with little time on their hands to cook-quinoa is a very quick-cooking grain).

This recipe calls for delicata squash, but I used acorn squash instead (because I had it on hand) and the recipe made enough quinoa salad to generously fill six squash halves. While the presentation is beautiful, actually eating the quinoa salad by scooping it out of the intact squash shell with the squash flesh is a bit more difficult. I cut my squash shell in half, scooped out the squash flesh and mixed it in with the quinoa salad. The soft and sweet squash mingles well with the nutty quinoa, crunchy and tart apples, and peppery arugula, filling you up and leaving you feeling healthy and energized.

Roasted Delicata Squash with Quinoa Salad
from Michael Symon, via Food and Wine

1. Preheat the oven to 350°. Brush the cut sides of the squash with 1 teaspoon of the olive oil and season the cavities with salt and pepper. Place the squash cut side down on a baking sheet and roast for about 45 minutes, until tender. 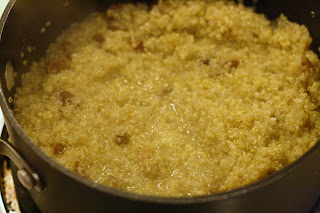 2. Meanwhile, in a saucepan, bring 2 cups of lightly salted water to a boil. Add the quinoa, cover and simmer for 10 minutes. Stir in the raisins and simmer, covered, until the water is absorbed, about 5 minutes. Transfer the quinoa to a large bowl and let cool.

3. In a small bowl, whisk the vinegar and honey with the remaining 1 tablespoon plus 2 teaspoons of olive oil and season with salt and pepper. Add the dressing to the quinoa along with the apple, shallot, garlic, mint and parsley and toss well. Add the arugula and toss gently. 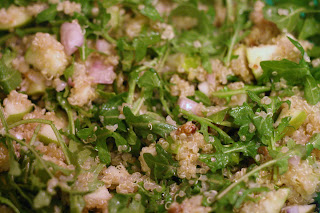 4. Set the squash halves on plates. Fill with the salad and serve.
Posted by Laine at 5:18 PM