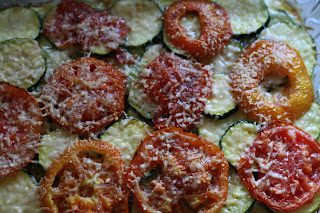 I've been slowly publishing the many zucchini recipes I tried this season because it seemed like it would never end. Much to my relief, my zucchini plant seems to finally be slowing down. After spending several hours Labor Day weekend I'm finally caught up and have a lot of recipes to share before the zucchini growing season is over entirely. In addition to my zucchini, I have a couple of heirloom tomatoes plants that are putting out a fine, though modest crop, and this recipe was the perfect meal to represent my garden's bounty.

The list of ingredients here is short, the flavor relying on the quality of the produce and the Parmesan cheese -that green can of Kraft and supermarket tomatoes just won't cut it here. It doesn't get more fresh and local than the backyard and while I could lay down some serious money for imported Parmigiano-Reggiano, I opt for Hook's Parmesan. It's surprising how just that modest amount of cheese, a couple of eggs, and some olive oil make this feel exceptionally rich, the rice adding just enough to make this as a light meal for four with a side salad and slice of crusty bread. It may have unofficially turned to fall with the passing of Labor Day, but I'm anxious to hold on to these tastes of summer just a little bit longer.

1. Preheat oven to 450°F with racks in upper and lower thirds.

3. Roast zucchini in upper third of oven and tomatoes in lower third, turning vegetables once halfway through roasting, until tender and light golden, about 10 minutes for tomatoes; 20 minutes for zucchini. Leave oven on.

6. Bake in upper third of oven until set and golden brown, about 20 minutes. 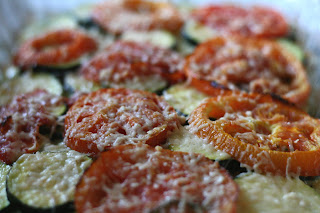