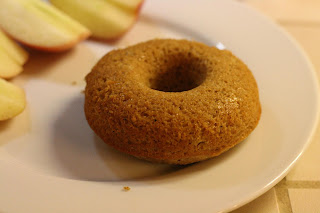 Who doesn't love donuts? The sheer fact that there are gluten-free donuts, vegan donuts, and ones topped with bacon proves that there's one out there for almost everyone. I'll admit I've never had a Krispy Kreme and just had my first donut from Dunkin' Donuts a couple of weeks ago, but I've sampled donuts far and wide from many small bakeries. In Madison, Greenbush Bakery has to be my favorite and I've never passed up an apple cider donut at an orchard, but I've long been meaning to try making them at home. And only 6 months after I bought the donut pan, I finally did! I'll be the first to admit these are not the be-all and end-all of donuts - they are a basic recipe and baked instead of fried - but their simplicity is the very reason I chose to share them. I always like to start with the basics before making too many tweaks to a recipe and this recipe is an ideal jumping off point for my own recipe development. As written here, these are nutty, subtly spiced with a lovely tender crumb, but they can be easily elevated with the glaze of your choice. This can be as simple as a smear of peanut butter or jam or as culinary as a lovely homemade caramel, or even a simple dusting cinnamon sugar or powdered sugar. Though these won't take the place of a deep-fried donut from your favorite bakery, they are a lovely healthier alternative for a weekend morning when you aren't ready to get out of your pajamas and face the world.


1. Whisk together all of the dry ingredients in a medium-sized mixing bowl.

2. In a separate bowl, beat the eggs, oil and water (or buttermilk or yogurt) until foamy.

4. Butter or grease the doughnut pan; non-stick pan spray works well here. Note: even though the pan is non-stick, since the doughnuts are low-fat they may stick unless you grease the pan first. Fill each doughnut form half full.

5. Bake the doughnuts in a preheated 375°F oven for 10 to 12 minutes. When done, they'll spring back when touched lightly, and will be quite brown on the top.

6. Remove the doughnuts from the oven, remove them from the pan, and allow them to cool on rack. Glaze with icing, or coat with cinnamon-sugar or any non-melting sugar.
Posted by Laine at 6:47 AM