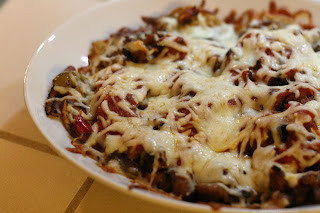 There are bowl games and NFL playoffs coming up, and let's face it, you need snacks. I spent most of the Packer season making personal pizzas/flatbreads and experimenting with different variations on poutine, but after I decided I'd exhausted my creativity with those foods (at least for the time being), I starting flexing my culinary muscle with nachos. First of all, I should say that I'm using with word nachos very loosely here (i.e. tortilla chips with toppings), but since no real Mexican cuisine actually includes nachos, I don't feel bad about flexing the definition. That being said, who doesn't love tortilla chips smothered in cheese, sauce, meat, and veggies? I started my nacho tangent with something very standard and about as Mexican as nachos ever get-chicken, black beans, corn, cheddar, salsa, sour cream, scallions, and cilantro. While that was an absolutely delicious plate of indulgence, my mind immediately started to calculate other delicious combinations, this being my first nonstandard creation. It may be a bastardization of two cultures, but there's no denying that  sausage, peppers, onions, marinara and mozzarella are all great friends and make tortilla chips just as happy as they do pasta. But if this rich dish makes you feel a little too guilty, just sneak it in before New Years' resolutions roll around and make up for it in 2013.

1. Preheat oven to 450 degrees F. Meanwhile, remove the casing from the Italian sausage, and cook in a large skillet about 7 to 8 minutes, until sausage is nicely browned. Add the sliced onions to the skillet and continue to cook until onions are browned and tender, about 8 to 10 minutes more, adding the roasted red peppers during the last few minutes of cooking to warm through.

2. Place tortilla chips on an oven-safe platter in an even layer. Top chips with sausage, pepper, and onion mixture, pour marinara over the top, and sprinkle with mozzarella.

3. Place platter in the oven and bake until nachos are warmed through and cheese is melted and browned in spots, about 5 to 10 minutes. Serve immediately.
Posted by Laine at 4:00 PM