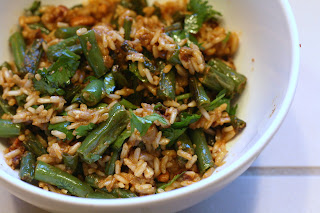 Although I like to cook with less common grains like bulgur and quinoa, sometimes it's nice to come back to good old rice. Rice is more or less just a canvas for other flavors, serving as the perfect sponge for the plethora of spices in this recipe. Don't let the name chile rice scare you off if you're generally spice averse - the chile used here is the flavorful, but mild, ancho chile, which is the dried form of the poblano (perhaps my favorite pepper). More than any recipe I've made recently, I wish I could somehow make this into a scratch and sniff blog. This smoky, sweet, and nutty notes all blend together to be so much more than the sum of their parts and fill the house with an irresistible aroma. The beautifully browned green beans and toasted pecans add more delicious nutty notes that are contrasted perfect by the fresh and citrusy cilantro and lime juice. Brown rice can be substituted for the white rice, but additional cooking time (and likely water or broth) will be required, though I think it's well through the extra investment. Substantial enough to be a light main course, this can be made heartier with grilled shrimp or chicken, or even black beans, which I found to be a surprising but delicious addition to my leftovers the next day. Another home run for Susie Middleton, I hope recipes like this one will teach more people to love veggies the way I do.

1. In a small bowl, combine the cumin, coriander, ancho chile, paprika, cinnamon, and 1/4 teaspoon salt. In a liquid measure, combine the milk and water.

3. Add the remaining milk mixture and bring to a boil. Reduce the heat to very low, cover tightly, and cook for 20 minutes.

4. Meanwhile, in a heavy nonstick medium skillet, heat the remaining 1 tablespoon butter and the remaining 1 tablespoon olive oil over medium-high heat. When the butter has melted, add the green beans and 1/2 teaspoon salt. The pan will look full. (That's okay; the beans will steam and brown at the same time.) Cook, stirring only occasionally at first and more frequently as the beans begin to brown, until the green beans have shrunk somewhat, all have ab it of browning, and some are dark brown, 9 to 12 minutes. Remove the skillet from the heat and transfer the beans to a plate.

5. Remove the rice pot from the heat and place a folded paper towel under the lid. Let sit, covered, for 5 minutes. Uncover (the foam from the milk will be on top of the rice) and fluff and stir with a fork. Re-cover loosely with the lid (leaving the paper towel in place) and let sit for 5 minutes more. Uncover and transfer the rice to a medium bowl. Stir in all the beans, three-quarters of the toasted pecans, and three-quarters of the cilantro.

6. In a small cup, combine the lime juice and maple syrup. Pour the mixture over the rice, and stir to combine. Taste the rice and season withe more salt, if needed. You can also add a bit more lime, if you like. Divide the rice among four bowls and serve garnished with the remaining pecans, cilantro, and lime wedges.