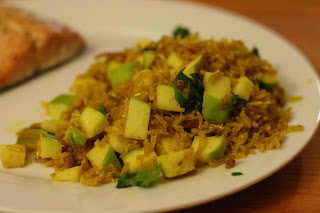 Although I put a number of cookbooks on my Christmas list, The Food Matters Cookbook

by Mark Bittman of the New York Times was a surprise gift from my mom. I've considered picking up some of his other cookbooks before, but this is first of his that I've owned. As I do with all new cookbooks I acquire, I went through page by page marking all the recipes I'd like to try. This cookbook is packed with healthy, delicious-sounding recipes and I chose this one to try first because I already had all the ingredients and because it was simple and mostly hands-off, allowing me to get the rest of dinner ready while it baked in the oven.

While this isn't a show-stopper of a dish, it's a solid, easy-to-prepare side and made for a nice accompaniment for a grilled piece of salmon. The fresh cilantro and crunchy apples are nice foils to the nutty brown rice, though I would have liked much more ginger flavor (ginger is one of my favorite flavors) and would add some ground ginger and more fresh ginger next time. If you don't have an oven safe skillet, preheat an oven-safe dish while you cook the rice on the stove and transfer the rice mixture into the baking dish once the rice mixture comes to a boil. This recipe is a great starting point for more brown rice-based sides; I'm also curious to see how well it works in my rice cooker.

1. Heat the oven to 350 degrees F. Put the oil in a large ovenproof saucepan over medium heat. A minute later, add the curry powder and ginger and cook, stirring, for about a minute. Add the rice and some salt and pepper; cook, stirring, until the rice is glossy and translucent, just a minute or two. 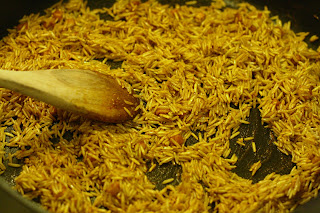 2. Measure 1 3/4 cups of the coconut milk; stir it into the rice mixture. Bring to a boil, then cover tightly and transfer to the oven. Bake, undisturbed, for 45 minutes.

3. Meanwhile, put the shredded coconut in a small skillet over medium heat and toast, shaking the pan and stirring often, until it begins to brown, 5 to 10 minutes. Remove the rice from the oven, uncover, and use a fork to stir in the shredded coconut, apples, and cilantro. Replace the lid and let it rest for 10 minutes. Taste and adjust the seasoning and fluff again. Serve immediately or at room temperature, topped with yogurt if you like.
Posted by Laine at 5:51 PM