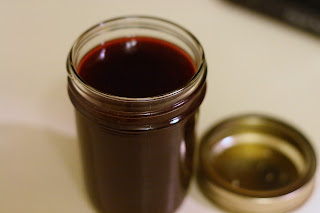 I bought what came to about a pound of Concord grapes (after stemming them) at the farmer's market on a whim this past weekend because I just can't resist new produce. When I bought them, the man selling them asked me if I was making juice or jam and I instantly said jam. And so a new project was born! My usual recipe sources didn't have the plethora of recipes that would be available for say, strawberry preserves, but I could still find one from a reputable source, Gourmet. I've reported that recipe faithfully below as most people will probably want to do it at a large scale, but I did it successfully at one-fifth scale.

I didn't quite use the exact proportions of the scaled-up recipe at each step (overall I used 1 pound of grapes to 1 pound sugar, the same as the original recipe), but they worked just fine. I pureed the skins of 1 pound of Concord grapes with 3 T. of sugar, adding the remaining 13 T. of sugar (measure out a cup of sugar and then remove 3 T. to puree with the skins) and added 1/2 tablespoon of lemon juice to the mixture. Working at a much smaller scale, my cooking time was significantly reduced. It took only 10 minutes or so for all the pulp to break down; I then pressed the mixture thorough a fine strainer instead of using a food mill, even though I have one. After returning the strained syrup to the pot, I started testing for doneness after boiling for about 15 minutes; it was done after about 20 minutes and yielded one half-pint of jam. I didn't bother with the canning process as I plan on using the jam right away. I poured the hot jam into a clean pint jar, let cool at room temperature, and put it in the refrigerator.

This jam is delicious in PB&Js, on Beaten Biscuits, or Pan Co' Santi. It's so much better than store-bought, you may never want to go back to Welch's grape jelly again. 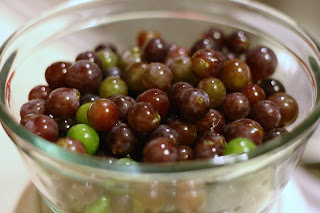 Special equipment: 7 (1/2-pt) canning jars with lids and screw bands; a boiling-water canner or an 8- to 10-qt deep pot; an instant-read thermometer; a food mill fitted with fine disk

Sterilize jars:
Wash jars, lids, and screw bands in hot, soapy water, then rinse well. Dry screw bands. Put jars on a rack in canner or deep pot and add enough water to cover by 2 inches. Bring to a boil, covered, then boil for 10 minutes. Remove from heat, leaving jars in water. Heat lids in water to cover by 2 inches in a small saucepan until thermometer registers 180°F (do not let boil). Remove from heat, leaving lids in water. Keep the jars and lids submerged in hot water, covered, until ready to use.


Cook jam:
1. Chill 2 small plates (for testing jam).
2. Slip skins from grapes and purée skins with 1 cup sugar in a food processor, then transfer to a 4- to 6-quart wide heavy pot. Stir in lemon juice, peeled grapes, and remaining 4 cups sugar and boil over moderate heat, stirring frequently and skimming foam, until pulp is broken down, about 20 minutes. Force jam through food mill set over a large bowl. Discard remaining solids. Return jam to pot and cook at a slow boil, skimming foam occasionally and stirring frequently as mixture thickens to prevent scorching, 35 minutes, then test for doneness. 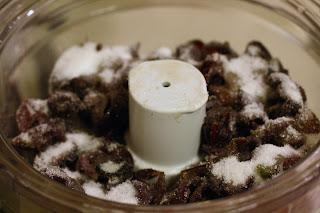 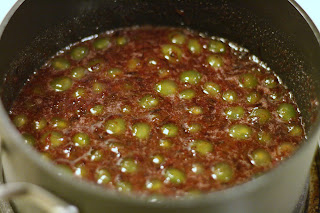 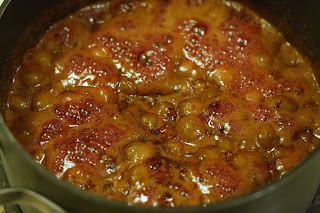 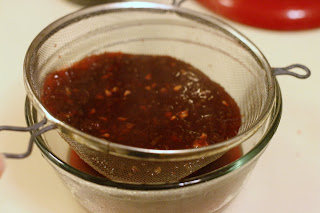 3. To test jam, remove from heat, then drop a teaspoonful on a chilled plate and chill 1 minute. Tilt plate: Jam should remain in a mound and not run. If jam runs, continue cooking at a slow boil, testing every 5 minutes, until done, up to 25 minutes more.

Seal, process, and store jars:
1. Drain jars upside down on a clean kitchen towel 1 minute, then invert. Ladle jam into jars, leaving 1/4 inch of space at top. Wipe off rims of filled jars with a clean damp kitchen towel, then top with lids and firmly screw on screw bands. Put sealed jars on rack in canner or pot and add enough water to cover by 2 inches. Bring to a boil, covered, then boil 10 minutes. With tongs, transfer jars to a towel-lined surface to cool.
Jars will seal; if you hear a ping, it signals that vacuum formed at the top of cooling preserves has made lid concave. Remember that you may or may not be around to hear that ping (some jars make the sound after you remove them from water, and others in same batch may take a few hours); the important thing is for jars to eventually have concave lids. Preserves will thicken as they cool.
2. After jars have cooled 12 to 24 hours, press center of each lid to check that it's concave, then remove screw band and try to lift off lid with your fingertips. If you can't, lid has a good seal. Replace screw band. Put any jars that haven't sealed properly in the refrigerator and use them first.
Cooks' notes: Let jam stand in jars at least 1 day for flavors to develop. Jam keeps in sealed jars in a cool dark place 5 to 6 months.
Posted by Laine at 6:37 PM