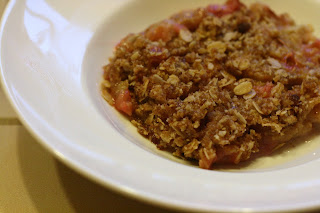 Though ramps certainly lead the charge when it comes to spring produce, rhubarb is also one of the most anticipated offerings that appear early in the farmers' market season. Though it is technically a vegetable, for most intents and purposes it is treated as a fruit, typically appearing in desserts, preserves, and cocktails. Children in the British Isles and Scandinavia eat tender stalks of rhubarb dipped in sugar for a sweet snack, but because of its strong tart taste it often is mixed with strawberries, raspberries, or other fruit to mute the assertive tartness. Because I could not devour the two pounds of rhubarb my husband harvested from my father-in-law's house by that method alone, I wanted to make a dessert that also celebrated rhubarb all on its own. This crisp recipe is just about as easy as it gets, but in that simplicity resides a perfect balance of sweetness, tartness, richness, and spice. I like the depth of flavor dark brown sugar contributes, adding just a little extra to classic butter-flour-oats-sugar crumble topping. Pastry flour will make the crumble lighter and more tender, with the whole wheat option adding an extra dimension of flavor. There's no mystery to this recipe, but the whole is definitely more than the sum of its parts.

2. In the bowl of a food processor, combine remaining 1/2 cup flour and the butter. Pulse until the butter pieces are pea-size. Add brown sugar, oats, cinnamon, and salt. Pulse to combine. Sprinkle over rhubarb.

3. Bake until rhubarb is tender and topping is golden, 35 to 45 minutes. Serve warm with ice cream, if desired. 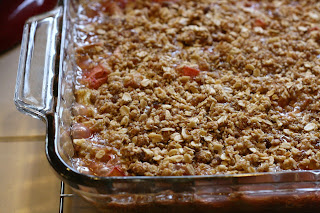