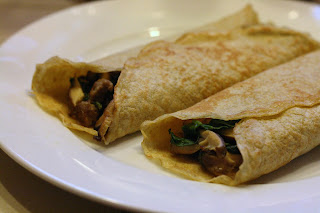 I think we've almost made it to grilling weather, which means I'll be shelving my Sunday night breakfast for the lure of the charcoal grill. I've tried my hand at making a lot of whole grain breakfast foods - English muffins, biscuits, donuts, waffles, and pancakes so I feel good about moving on to flame-cooked meals. And so I present to you what may be my last hurrah, whole wheat beer crepes.

I'm especially pleased with this recipe because I was able to incorporate one of my homebrews, a California Common-style beer (a style defined by Anchor Steam), making a recipe that was multiple levels of homemade. Beer not only brings flavor to these crepes, but the carbonation makes them especially light. I used my California Common because it has a presence without taking over, meshing nicely with the whole wheat flour and providing the perfect canvas for savory flavors to shine. My basement is full of even more styles of beer I've brewed - hefeweizen, chestnut and apple ales, a pumpkin dubbel, a dry and sweet stout, an ESB, and a porter, all of which I could be appropriate choices with the right fillings. Make sure to choose a beer you really like that actually has flavor (read: no mass-produced American Adjunct Lagers) because it is what will make these crepes truly spectacular. With such a homebrew cache in my basement, this recipe is sure to make a reappearance, its next incarnation probably a dessert concoction filled with fruit and Nutella.

Like all of the recipes I've made before in this series, I made a big batch and froze the extras to enjoy for a couple of weeks. So far they've been two spectacular weekday breakfasts - the first time filled with cream cheese, strawberries, honey, and almonds and then second simply filled with peanut butter and banana. They can be enjoyed at room temperature, but a quick zap in the microwave turns makes for an especially warm and cozy meal.

1. Whisk the eggs until they are combined, then whisk in 1 cup of the milk and the beer. Add the flour to the liquids, sprinkling it over the surface as you whisk to avoid lumps. Add the salt and oil, then whisk the batter vigorously for 3 to 5 minutes so all is thoroughly incorporated. Let the batter site for 1 hour.

2. Heat a 10-inch skillet, perferably non-stick, over medium heat. Brush it with butter, and when it's hot but not smoking, pour a scant 1/3 cup of batter into the center of the skillet and rotate it so the batter covers the bottom of the pan in a thin layer, pouring out any excess batter. Cook the crêpe until it is just golden on one side, 1 to 2 minutes, turn it and cook until it is golden on the other side, about 30 seconds. Transfer to a plate, and keep warm by covering with aluminum foil. Continue until all of the batter is used. If the crêpes are thicker than you'd like, thin the batter with additional milk, whisking it in gently.

1. Preheat a pan over medium heat. Add sausage and break into small pieces. Cook, stirring frequently and breaking into pieces, until the sausage has rendered some of its fat. Add mushrooms and a pinch of salt and cook, stirring occasionally, until mushrooms are tender, about 7 to 10 minutes. Add spinach and cook until wilted, 2 to 4 minutes.

2. Pour thinned mustard over sausage mixture and stir to coat thoroughly. Cook just another minute or two or until sauce is cooked down, but filling is not dry. Divide filling evenly between two crepes and serve promptly.
Posted by Laine at 7:03 AM