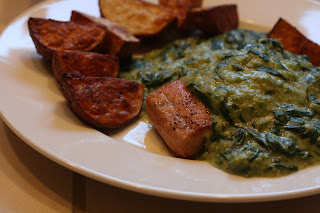 As soon as poblano peppers appear at the farmers' market, I get renew my obsession with Mexican food. I'm not talking nachos, tacos, quesadillas and the like, but the authentic Mexican food that abuelas have been cooking for generations. And if you're looking for real Mexican recipes, look no further than the pantheon of Mexican cuisine that is Rick Bayless. (For the record, Diana Kennedy is an impeccable resource as well). I've never made a Rick Bayless dish that I didn't think was not only good, but exceptional, and this recipe most certainly does not break that pattern. Although salmon isn't a protein that you'd typically think of in Mexican cuisine, the traditional flavors of Mexico are certainly at home with salmon. Beautifully smoky and spicy roasted poblano chiles are joined by fresh spinach in a bright, yet creamy, sauce that complements the rich and fatty salmon without overpowering it. Though you only use a small amount, the masa harina adds a hint of sweetness, freshness, and texture that is absolutely vital to making the sauce its best. I suggest roasted potatoes for scooping up all the extra sauce because you won't want to leave a bit on the plate. A less-than-typical way of enjoying both Mexican food and salmon, this recipe is a must-try for anyone looking to expand their Mexican food repertoire.

1. Roast the poblanos over an open flame or 4 inches below a broiler, turning regularly until blistered and blackened all over, about 5 minutes for an open flame, 10 minutes for the broiler. Palce in a bowl, cover with a kitchen towel and let cool until handleable.

3. Turn the oven on to its lowest setting. Heat the oil in a very large (12-inch) skillet, preferably nonstick, over medium. Add the garlic and cook, stirring regularly, until soft and lightly browned, about 4 minutes. Using a slotted spoon, scoop the garlic into a blender. Set the skillet aside.

4. Rub the blackened skin off the chiles and pull out the stems and seed pods. Rinse the chiles to remove bits of skin and seeds. Roughly chop and add to the blender, along with the masa harina and milk. Blend until smooth.

5. Return the skillet to medium-high heat. Sprinkle both sides of the fish liberally with salt and pepper. Lay the fillets in the hot oil and cook until richly browned, about 2 to 3 minutes. Use a spatula to flip the fillets, and cook until the fish barely flakes when pressed firmly with a finger or the back of a spoon (you want it slightly underdone), usually a couple of minutes longer for dish that's about 1 inch thick. Using the spatula, transfer the fish to an ovenproof plate and set it in the oven.

6. With the skillet still over medium-high, pour the poblano mixture and whisk until it comes to a boil and thickens, about 1 minute. Reduce the heat to medium-low and simmer, stirring frequently, for 5 minutes to blend the flavors. If the sauce has thickened past the consistency of a cream soup, pour in a little more milk. Taste and season with salt, usually a generous 1/2 teaspoon. Add the spinach to the sauce and stir until it is warm and well coated with sauce.

7. Divide the creamy spinach among four plates. Top each portion with a piece of seared fish. (Or, if it seems more appealing to you, spoon the sauce over the fillets.) Serve without delay.
Posted by Laine at 12:48 PM