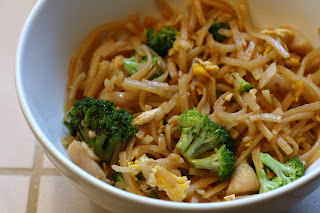 One of the culinary bright spots while I was living in Ames for graduate school was the Pad See Ew at Thai Kitchen. Although the food scene in Madison is far superior to that in Ames, I have yet to find a Pad See Ew that I like as much as that one. Perhaps it was in part because I was usually eating lunch with Heather, one of the greatest people I know, but that dish still holds a soft spot in my heart. I was recently inspired to try and make it myself after going down a culinary rabbit hole of unknown origin, starting with this recipe from Serious Eats. Although nothing can compare to a dish made in a well-seasoned wok with years of flavor, this dish has much of the flavor I remember, my only regret being I had to substitute pad thai noodles for flat rice noodles. Oyster or fish sauce imbues the dish with umami, blending beautifully with chewy rice noodles, rich eggs, and fresh, crisp broccoli. It takes less time to make this meal than order delivery, is much healthier, and is at its best flavor and texture fresh from the wok so I know this is destined to make many more appearances for dinner. I look forward to tweaking and perfecting this recipe even further and someday getting to cook it for an old friend.

1.In a medium-sized bowl, toss the chicken with 2 teaspoons of soy sauce and the baking soda. Set aside.

3. Bring a large pot of water to a boil. Add the rice noodles and cook according to the directions on the packaging. When done, remove noodles with a pair of tongs and drain in a colander. Toss with a tablespoon of oil so the noodles don't stick together.

4. Place the pot back over high heat and return to a boil. Place the marinated chicken in a large strainer and dip into the water. Cook until the chicken looks white. When done set the chicken aside in a large bowl.

5. Pour enough oil into a large work to just coat the bottom and turn heat to high. When just starting to smoke, add the broccoli. Stir-fry until broccoli turns bright green and becomes tender. Transfer broccoli to the large bowl and set aside.

6. Carefully rinse out the wok and then dry it. Pour in two tablespoons of oil, and turn heat to high. When just starting to smoke, crack in the eggs. Using a wooden spoon, scramble the eggs. When set, add the noodles. Toss well to separate the strands, and then let them cook for a minute.

7. Drizzle on the sweet soy sauce, toss well, and then let cook undisturbed until the noodles start to brown, about one minute. Add the broccoli and chicken back to the pan. Toss well. When everything is warm, pour in sauce. Stir fry until everything is coated. Turn off the heat and serve immediately. 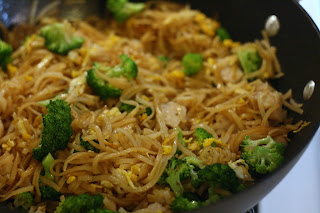